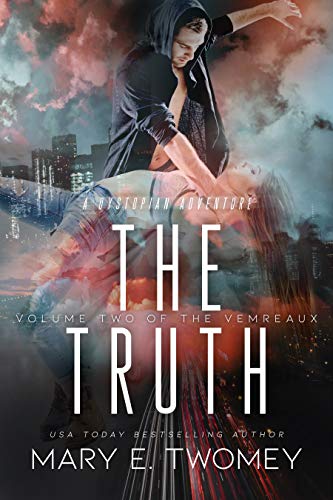 Synopsis from Amazon:
Living in the free world is a lot more work than Blue Anders bargained for.While Sam is patient, Baird is not – demanding the utmost perfection from his sister before she travels to the O-blood island to destroy the predator. With the crowned prince of Europe declared among the missing, the emperor teams up with Blue to bring his son home.Blue doesn’t count on falling in love with Sam, or being taken in by the royal family, but she finds herself clinging to the last moments of the life she always wanted before going off to fight her final battle.
>>>>>>>
My Review:
I can't handle it! Francis help me, I can't handle "The Truth"!

I had forgotten, in the two years since reading "The Way", just how intense Twomey's style is. Oh sweet heaven, there were moments where I literally could not take a proper breath because my brain was too busy trying to furiously comprehend the text before me.
If "The Way" was a bare first, clenched for a fight, "The Truth" was the first round of that fight. I can honestly say that Twomey is one of the foremost examples I could ever think of in the technique of "show, not tell." She describes the inner turmoil, the body language, the external focus, and leaves the reader to wrestle with emotions our souls did not see coming! The debilitating insecurity of Blue, the caustic, cold fury of Baird, the burning desire of Sam, the mind-numbing terror when they go after the predator—I felt it all. Every minute of it. I have been ridiculously tired all week because I stay up later than I should to finish "one more chapter"—and then when I finally do put it down, I cannot stop thinking about it.
Twomey continues her riveting social commentary with the sort of compelling voice Suzanne Collins could only dream of having--the suggestions for prison reform proposed by Baird are infinitely more natural coming from him, than anything penned as from the mouths of District 13 officials. The class disparity Blue feels as someone raised as a "Wayward" is never more painfully clear than when she is brought to live in the royal mansion, as a "free person" but still very much trapped in her mind, not just by her upbringing but also by her inevitable destiny. She is the "Prophesied One" but she very much doesn't behave like one's average "Chosen One." Twomey blasts that stereotype to bits every bit as vigorously as she does all the other tropes of dystopian literature, with several well-timed, meaningful conversations.
And then there were the plot twists. Just when the story seemed to be cutting along smoothly, growing into a familiar rhythm... BAM! Twomey comes out with a chapter from a completely different angle that completely obliterated my feels all over again.
I loved the characters, the interactions, the development, the plot, the style, the resolution (at least for the conflict in this book), the continuity--this series is shaping up to be pretty much everything a great series ought to be!

Defying expectation, trend, and "normal" in every way it possibly could, "The Truth" is spectacular in its poignancy and its delivery. I give it *****5 STARS***** all the way, and I am going to add an Upstream Writer Certified DEFINITELY RECOMMENDED rating to that. If you want some good dystopian YA with well-rounded, credibly-developed characters, then the Vemreaux Trilogy is one you DO NOT want to miss!
Further Reading: (Paranormal/Thrilling/Reluctant Heroine/Also By This Author)
The Vemreaux Trilogy--Mary E. Twomey
-The Way
-The Truth *(This book)
-The Lie
The Untamed Series--Madeline Dyer
-Untamed
-Fragmented
-Ugly Girl (Faite Falling Series)--Mary E. Twomey
-A Spell in the Country--Morgan Smith
-The Seventh Crow--Sherry D. Ramsey
-Beasts of Babylon--E. A. Copen
-Notna--J. D. Cunegan
The LouisiAngel Series--C. L. Coffey
-Angel in Training
-Angel Eclipsed
-Angel Tormented
Judah Black Series--E. A. Copen
-Fortunate Son (prequel novella)
-Guilty By Association
-Blood Debt
Posted by Leslie C at 5:33 PM