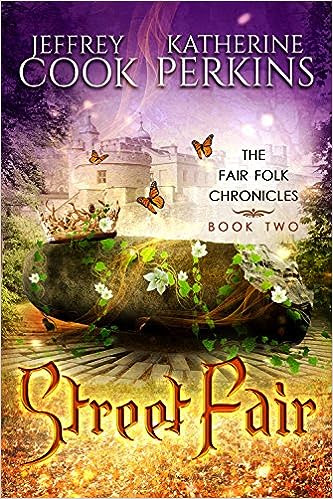 Synopsis from Amazon:
School is out for the summer, which will give Megan O'Reilly's friends time to see that she really starts learning something useful. When music is magic and magic is sometimes medicine, it's easy for a menehune BFF, a satyr rock star, and a disabled pixie with a service crow to give a girl information overload.
The weekend of the Fremont Solstice Fair is also the weekend of the Goblin Market. Megan's adjusted enough to this Unseelie Princess thing to see some use in all this colorful shopping potential, both real-world and magical, even if she can get ahead of herself sometimes.
But someone wants to use the Market for his own destructive purposes. And he knows a guy who's great at ruining other people's Midsummer nights.
>>>>>>>

Oh boy! When I read the sneak-preview chapter at the end of Foul Is Fair, I knew I was in for a treat--and once again, Cook and Perkins delivered on every level!
Megan is back, and she's got a whole network of support around her. The deepening relationships happening with Ashling and Justin and Cassia were marvelous in their development.
The backdrop of the Goblin Market hearkened back to Neil Gaiman's Village of Wall and it's gateway into the Faery marketplace of Stormhold, and the fact that the real-world connection was the Fremont area was an entertaining choice, and well-executed. (Particularly the scene where Megan meets the "real-live" Fremont Troll!)
Megan is still having trouble with her mom, but that is nothing compared to the trouble brewing on the Faerie side of things! A new enemy has arisen, one who wants to seize power, and is trying to awaken a dire evil to accomplish it! Street Fair also further accentuates the struggles Megan faces, not just being a member of two worlds where in one she is a princess and in the other she's a "special case," but also the fact that essentially she is the daughter of "divorced" parents, having to take care of her mom in the real world while her father the Fairy King is trying to help her realize her place as his successor. This dichotomy is very well presented and handled in a very relevant manner, not relying on stereotypical tropes and cliches, but portraying the struggles and successes in a very realistic light.
The whole thing is one big fantasy romp, and a delightful one at that! The balance between peril and humor, the creative blending of myth and reality, the battle scenes and even the spots in the story where the characters are just hanging out together... everything moves and blends and builds toward a conflict that's going to take everything they have to resolve it--and it's not over!

Fantastic novel, great characters, solid plot.... if I could give a book more than *****FIVE STARS***** I would say this one totally earns it! "Street Fair" earns an Upstream Writer Certified HEARTILY RECOMMENDED. For a good clean read, an exceptionally wholesome fantasy adventure, and a whole cast of relatable characters you'll want to revisit again and again, look no further than "Street Fair" and the rest of the Fair Folk Chronicles!
Posted by Leslie C at 11:22 AM