Junior police officer Alex Davis has spent his entire life letting other people do most of the work: in school, at home, in sports--as long as there was someone else who could do it better, why need he bother?
One night, Alex receives two calls and chooses the easier option--a choice that comes back to haunt him... literally! Now Alex finds himself at the behest of two wronged ghosts bent on teaching him a lesson--and it promises to be one he'll never forget!

An aspiring writer is thrust into the adventure of a lifetime as the story she is trying to write suddenly materializes around her. Follow Laura as she travels through seven different genres and finds herself pitted against everything from fairies and dragons to aliens, giants, Western-style bandits, and pirates!

Cramwell “Cram” Fornberg is a reclusive man who keeps mostly to himself, staying in the house when he can, looking no one in the eye on the occasions when he has to go into town.
Cramwell becomes interested in cryptology, deciphering every code he can find. One day, he deciphers a note and is horrified to read, “Beware! Someone will disappear at eight!” At first he thinks nothing of it, but two days later, Cramwell finds an article in the newspaper about a suspected abduction at the exact time at which he had deciphered the note!
Suddenly, the shy Cram must turn from a man who looks in the eyes of nobody, to one who must watch everyone, for fear they might disappear! As he continues receiving more notes, Cramwell becomes more and more agitated. Who is sending the notes? What do they mean by saying someone will disappear? Will a victim eventually be killed? Will someone else begin receiving notes twenty-four hours prior to his own murder? 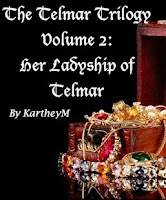 Melanie has been told since the day she was old enough to care what people thought of her that she was a Curse on her community. Set adrift from the island that was once her whole world, she encounters a group of four siblings from a place called England, and soon discovers they hold the keys to a secret world where her deaf-muteness does not exist, and where a Lion tells her that she is his Blessing to an entire nation. Melanie has heard of blessings in disguise--but how could a Curse be a Blessing without knowing it? 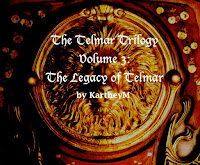 5. The Day of Reckoning

Yeah, I know it's not "technically" a Saturday Series, but it is a series, so I'm making it accessible! Start here to read the story of how a team of random characters came together to defeat a powerful enemy.
Inspired by a forum RPG "game" run by a group of friends, I set out to write a story involving the recurring villain of the game, a sect known as the "Elitinati." Players "loaned" me characters to write--and it was my first experience imbuing characters that weren't mine with traits I lifted straight from the players themselves... to everybody's delight and entertainment! Start here--> Prologue Part 1
Also read the story on Wattpad: "The Day of Reckoning"

Bored and looking for something to spruce up my blog, I created a project called "The Suggestion Box." Each week, I asked readers and followers for a list of four things: a name, a place, a time, and an object. My goal, then, was to create a story involving those things. 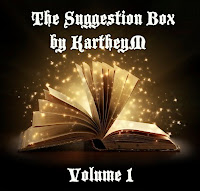 Also read a 5-part continuous story based on these lists, on Wattpad: The Suggestion Box, Vol. 1

The Suggestion Box, Vol. 2! A.K.A. "The Legend of The Ecrivaine"

This time around, I wanted to do something different: I wanted to challenge myself to create a continuous plot, no matter what list people came up with. I figured that if a list didn't quite fit sequentially, I could just put it in a different order. As it so happened, the lists people generated with practically ZERO context ended up fitting perfectly, one right after another. I didn't end up re-organizing them at all, and the story wound up absolutely brilliant!
Also read the whole story on Wattpad: "The Suggestion Box, Vol. 2: The Legend of the Ecrivaine" 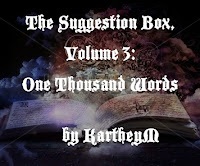 The third year, I added picture prompts for every week, and because "A picture is worth a thousand words," I gave myself a thousand-word minimum for each story. Not only did I manage to make the series last an entire year (50 weeks, all told--my longest Suggestion Box series yet!) but I also had a continuous story that I managed to pull off, along with the stand-alone stories!

*Note: The numbers on the list skip forward because some of the lists were used in the continuous story.

Read it on Wattpad: "The Suggestion Box, Vol. 3: One Thousand Words";  "Serenity's Light"

The Suggestion Box, Vol. 4: A to Z Challenge

Just like it says, the fourth year of the Suggestion Box, I happened to also take an "A to Z Challenge." Hence each week I had to come up with a Suggestion Box List (a name, a place, a time, and an object) and because of the challenge, all four items had to begin with the designated letter!
I chose to use character and/or place names from previous works, whether they be old Suggestion Box pieces, other Serials (such as Clan of Outcasts for D, J, and Z; also I chose to write tie-in stories for "Princess of Undersea" for G, U, and Y) both finished and unfinished. Another rousing success!
Also Read it on Wattpad: "The Suggestion Box, Vol. 4: A to Z Challenge"
( * Continuations of Suggestion Box installments)


6. The Clan of Outcasts

This was a series inspired by several random "character inspiration" images that I felt carried the same aesthetic. An idea began to form, of a group of Gifted individuals (translation: they have superpowers) currently in hiding, but things are falling into place to allow them to restore balance to the Realm. I spent the first story arc introducing each individual character, and then for the second, I intended that the outcome of the story would be based on the characters people liked--but alas, engagement not quite being what I had hoped, it took far more effort than I realized to garner up a decent level of response from readers. After a considerable hiatus, I finally figured out a way to combine this series with the A to Z Challenge "Suggestion Box" series, and so was able to find a suitable ending for it.

Read it on Wattpad: "The Clan of Outcasts"

What would you do if you found out that the people you always regarded as your parents were actually a couple minor deities forced into hiding to prevent the escape of a violent, chaotic demon who would use them to gain control of the whole minor pantheon--and that you might have accidentally released said demon without realizing it?
Archaeological student Priscilla thinks that going to a dig on a remote Mediterranean island is the golden opportunity... until she discovers her adoptive parents' secret past, and the "chance of a lifetime" becomes a desperate "death match"!

Earlier this year, I learned of an anthology accepting submissions, and the theme was going to be "Variations on the Cinderella Fairy Tale." Of course, my first instinct was to rewrite it, with DRAGONS. I didn't quite make the deadline, and the resulting story was definitely more than double the recommended word count limit for the submission... but I posted it here, anyway! Primarily set in a small, close-knit town in Southern Italy in the 1920's, which is run by a single family, Mafia-style, this story tells of a young servant girl plagued by strange scars and a magic ring with ties to another dimension. (Those who have read The Legend of the Ecrivaine will be interested to know that I borrowed some of the lore--specifically the lore surrounding the Midnight Dragon--for this story... so also be on the lookout for familiar characters!

Red has considered it her sworn duty to serve as Guardian of Queston for as long as she can remember. As a young girl, she was taken in and cared for by an old shepherd and his wife--even after they discovered her incredible secret: Red is a lycanthrope, able to shapeshift into a wolf at will. The villagers of Queston know that the innocent have nothing to fear from the woman or the wolf, and they teach their children the same: Whenever there is danger, or crime, where evil lurks--the Red Wolf comes to administer justice and provide safety for those who need it.
Until one fateful day, on the trail of a meddlesome wild wolf, a wounded Red ends up in the custody of a traveling peddler, where she discovers that, somehow, her ability no longer works, and she is trapped in wolf form. What is more the peddler brings her off the mountain, and Red must struggle to figure out what might be preventing her from changing back into a human, or risk leaving Queston vulnerable to danger while she remains trapped forever.