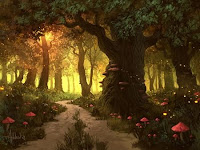 "Get up!"
Velora yelped as a thick, blunt object connected heavily with her side. She curled herself into a ball and tried to swallow back the bile climbing her throat. She opened her eyes to see a soiled boot fill her vision. It lifted.
"I said get up!"
Velora snatched her body out of the way, but everything felt slow and foggy. She smacked her head against the tree behind her, and used that to prop herself up in a sitting position. A burly, bad-smelling man crouched in front of her. His low-hanging jowls proclaimed the malnourishment suffered by the whole group.
"You ain't dead yet, Stray," he snarled in her face. "On your feet. Time to get moving."
Velora heard the words, and imagined the feeling of standing up and walking away—but her body didn't move.
"Come on!" He grabbed her shoulder and hauled her upright.
Velora felt as if her bones had been replaced with cloth. He dragged her like a limp doll over to the fire. She felt no pain—or too much pain.
"Another one," he grunted.
A soothing female voice echoed just on the edge of Velora's hearing. "It's the forest. It's making everyone sick. We need food to strengthen our bodies—"
"Well there isn't any! I sent scouts out two days ago to see if there was anything left of the village—"
"Stronger than they can..."
"Leave behind..."
The words were more garbled, blending together in nonsense as Velora felt her body suddenly get very tight and it was hard to breathe. Something rubbed against her leg—no, she was shaking so hard that her body rubbed against the ground.
The sounds of voices gave way to the growls of animals. When Velora could see straight again, she screamed.
The only people left around her were mangled bodies, still trickling fresh blood. The only living creatures roaming the camp in the dark were a pack of lean, dark wolves. They had made short work of those already dead, but they had gotten their full of others besides her.
Velora felt the rush of fear giving her body the strength she needed to escape—but the moment she moved, the pack would be on her. Right now, they were full and relaxed, and did not regard her as a threat.
Velora fought to hold her body inert and squeeze her eyes shut as the wolves scurried around, sniffling the surroundings and growling as they wrestled each other. She chomped down on the insides of her cheeks to keep her chin from trembling.
At last, the wail echoed through the deep night. All activity ceased as the alpha greywolf summoned his pack. They answered, and Velora listened to the snorts and snarls of the departing pack. Only when she could not hear any sound but that of the surrounding forest did Velora dare to open her eyes.
The pack was long gone. She struggled to her feet amid the carnage. She recognized the bodies of some of the survivors, but not all. The rest of them were still out in the forest somewhere.

They had left her behind because they assumed she was too weak to keep up; Velora narrowed her eyes as she spotted a trail through the undergrowth far too large to have been left by the wolves. Just outside the perimeter, she found a heavy boot print that matched the tread that had been so generously presented to her so many hours ago.

Small feet dashed around corners and down alleyways. Frantic eyes searched for sanctuary as the angry voices still rang against the earthen walls. At last he reached the small door, and pounded on it as hard as he could.

"Let me in!"
"You're not welcome here!"
"I live here!"
"Not anymore!"
His heart sank. "I didn't mean it!"
He hadn't intended to kill the mark; it was supposed to be easy—get in, intercept the money pouch, get out. One wrong jolt had got the mark's attention, and had ended up with his wrist in the mark's grasp, watching the wicked, bloodstained blade whistling right for his arm—
And then a ferocious jerk had thrown him back against the wall, and the mark convulsed, coughed up blood, and died right there in front of everyone.
"You were always bad luck!" Cried the voice behind the door.
"Please! Let me in!"
"Get away from here, street rat!"
There was no more time; they would be around the corner in a moment. He needed to keep running.
He ran until he forgot which street he was on. He ran until he couldn't hear the voices of the pirate crew out to avenge the death of their mate. He ran to escape those terrible words: "You were always bad luck."
He wandered back down familiar lanes to the shack he frequented during the day. It would be his home now. He curled up under the wooden slats and rubbed the tears from his eyes. Unlucky; that's what he was. Even the mysterious jolt that had saved him had only made his hard life that much worse. He was to blame...
He woke to a steady snapping sound and a delicious warmth. The temperature spiked as consciousness returned, and he opened his eyes. Above him, in front of him, all around—a blazing inferno greeted him. There was no escape. Everything burned.
Unlucky! He curled into a tight ball and wished for a quick death, so that he would suffer no more. The smoke overwhelmed him...

Slowly he opened his eyes. He lived! The harbinger of bad luck had survived the fire! All around him were the charred remains of the shack. The sunrise had just begun; it should have still been the cool of night just before dawn, but he could still feel the heat of the flames all over him.
A flicker on his arms caught his eye. He watched in alarm as a single flame traveled from his elbow to his hand—but he only felt the cool pressure of a fingertip! He cradled his palm around the tiny flame. Bringing his other hand up before him, he saw a matching flame there! Startled, he flinched—and two jets of fire sprang from his hands! Somehow, the flames that engulfed him had been absorbed into his skin. There was fire inside him; what did it mean? Was it more bad luck? Clenching his fists tight, he ran—westward, away from the harbor, out to the wasteland, where nobody lived.
~<>~<>~<>~<>~<>~<>~

The same dawn awakened Velora. She felt something wet on her face and tasted copper on her lips—blood. She sat up quickly—and immediately wished she hadn't. The wolf pack that had attacked the survivors lay all about her, slumbering deeply. She would not be able to escape them so easily this time. Carefully, she wiped at the blood dripping down her face. She had blood everywhere—yet she felt no pain; it must be that she had not been wounded. Blood dripped from her hair, soaked her gown and her hands; where did it come from?

The wolf in front of her opened its eyes. She stared into its golden gaze. It lifted its head, causing her to raise her bloody hand and cringe—but the fur on its back stayed flat. Only then did Velora notice that the wolf seemed to be staring at something behind her. She turned to follow its gaze—and screamed.
The huge greywolf lay behind her, flayed and beheaded. This was the source of the blood. She lay in a great pool of it, while the entire pack rested just outside the dark circle.
A few more wolves lifted their heads. Velora looked back at her hands. What did this mean? She gasped as a powerful odor wafted over her senses. She knew it was blood, but now she could smell it. Blood, human sweat, the scent of soot two days old, the heavy musk of woody earth just outside the cave—she could identify each scent in a single sniff. The more she awoke, the more her other senses began to open as well. She began to hear patterns in the panting of each wolf around her; colors seemed more brilliant, distances sharper to her eyes. She stood as the wolf pack stood with her, and she picked up the head of the greywolf. Raising it as high as she could, Velora threw back her blood-soaked head and howled.
"YOU ARE MINE!" She seemed to shout. "MY PACK! I AM THE ALPHA NOW!"
The pack answered back, "WE ARE YOURS! YOU ARE THE ALPHA! WE ANSWER TO YOU!"
Velora let the head drop, and let her wolves attack the carcass. The trail left by her fellow survivors stood out clearly in the freshness of morning. She had everything she needed to find them again; they would surely regret leaving her behind.

Before the sun had reached its zenith, she caught the remaining survivors—or rather, her pack caught them first. They followed the wishes of their Alpha Velora, attacking every human and laying waste to the whole group. Not one escaped—and after the pack had done its work, she entered and took whatever she wanted. She stepped over the fallen body of the camp leader, pausing only to remove his boots. She peeled off her worn, bloody shoes and slipped her feet into them, lacing them tightly and testing their heaviness. It would take some adjusting, but she could use them. At the back of his tent, she found a smooth, polished chest. With her bare hands and the strength of an alpha wolf, she broke the lock and threw open the lid.
Inside was a suit of armor—but what would a big, thick man want with a sturdy suit of women's armor? Velora clasped the pieces on her body, saving the breastplate, gorget, and pauldrons for last. Everything fit snugly; she could only guess they had been made for someone about her exact size—but whom? She picked up the last item in the chest—a dark cloak—and tied it around her neck. She sneered at the corpulent body before her.
"Who will survive now?" She snarled, kicking the man firmly in the head with his own boot.

The wolves fell in line behind her as she took the path out of the forest.
"It's time to get revenge on the ones truly responsible for my suffering!" Velora growled at them.
"TO THE PALACE!" She howled.
"TO THE PALACE!" They echoed.

On their way, their path bent westward, through the wilderness where no one lived.
Velora walked until the heat of the day grew too much for her. She found a cave nearby and instructed the pack to spread themselves around the vicinity and warn her of any intruders. She was so taken up with her newfound power that she failed to notice the second pair of eyes—human eyes—watching her from the deep shadows at the back of the cave.