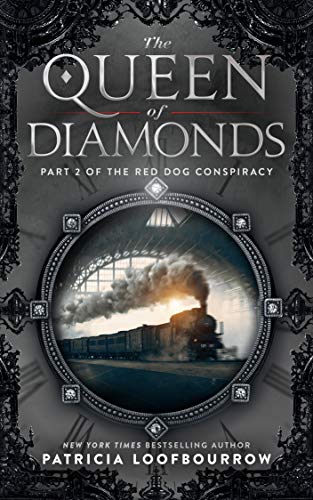 She just wanted an easy case ...
Private eye Jacqueline Spadros, recovering from her harrowing experiences the week prior, wants nothing more than a simple, straightforward case - preferably one the Spadros Family won't find out about. Aristocratic jewel merchant Dame Anastasia Louis, aka "The Queen of Diamonds," seems to be offering the perfect arrangement.
But Jacqui can't leave the madman "Black Jack" Diamond's crimes unpunished. And the more she learns, the more she begins to believe that this particular job wasn't such a good idea after all ....
Dark, gritty, multi-layered Victorian-inspired detective neo-noir that keeps the reader guessing to the very end.
>>>>>>>>>

Holy moly! The plot thickens, and it is GLORIOUS!

Loofbourrow teases out clues and plot twists in a novel replete with Victorian graces and social norms--everything through the eyes of a societal "outcast" married into the ruling family, so she is just as much learning about the expectations that come with being a gentrified lady as we are.

The continuity is amazing. It's been quite a while since I read JACQ OF SPADES, but as the action picks up right where the last one left off, I feel as if no time has passed--I've only somehow forgotten the odd detail here and there! But even that wasn't a huge issue, as the story sucked me right back in anyway!
Jacqui is trying not to cross her husband or step on any toes--the numerous run-ins with Roy in the first book have her good and scared... but also, she's realizing that all Tony needs is a bit of a push and he can be a different man from his father, though they are of the same blood. She's doing her best to stay on Tony's good side and maintain his trust--but the secret activities and investigations she's trying to follow are rapidly spiraling out of control!

I deeply admire the way Loofbourrow sets up her mystery. We get to know the characters on a deeper, more personal level. They’re not just names for different archetypes in a play; they are real people, swept into real conflict. I still can’t figure out who the Red Dog conspirators are, nor why they are killing certain people just when Jacqui gets close to having the information she needs. I am in awe at the depth, breadth, and complexity of all her characters: the titular “Queen of Diamonds” who isn’t at all what she seems; the Kerr siblings, who have been close friends with Jacqui, yet there are still secrets held between them; even the enigmatic Blaze Rainbow has more and more about him that he has kept to himself. Even Jacqui grows and deepens in her character and personality.

The magic continues, and the quality never lags. QUEEN OF DIAMONDS is a stellar, thrilling mystery, definitely worth a *****5 STAR***** rating, and an Upstream Writer Certified HEARTILY Recommended endorsement. If you like gritty, noir steampunk with dynamic, realistic characters, and don’t mind some suggestive scenes or intense peril—then The Red Dog Conspiracy is a jewel of a series!