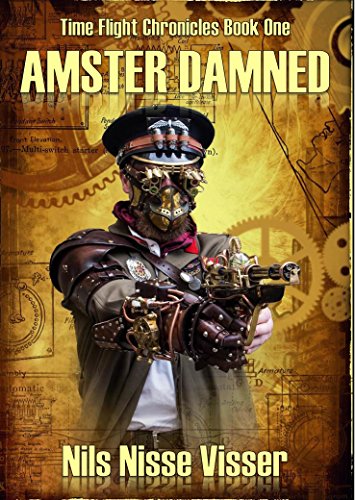 A seemingly routine missing person case brings Alice Kittyhawk to Amsterdam where she discovers that locating a missing botanist will involve delving into the murky and illicit world of temporal displacement. Working with the mysterious Ministry of Lost & Found, Alice will have to take on some formidable foes and race against the clock in defiance of the odds which seem to be stacked against her.
>>>>>>>>>>>>

More than ever l am convinced that a book by Nils Visser will invariably contain characters that win your heart, a suitable amount of action and peril, plenty of heart-warming moments... and a LOT of colorful slang!
He adds to his native Sussex jargon a plethora of Dutch phrases and terms, and one necessarily hears the thick accent anytime the strange terms appear—but that is all part of the immersive experience of Visser’s storytelling. The foreign words sound natural, and it’s easy to discern their meaning, with the context of the dialogue in question.

And what a context it was! A daring agent of time-travel, making her way around Victorian-Era Amsterdam on a quest to find antique books that will eventually lead her to an important figure who may hold the key to unfettered time travel. A figure that the time-travel authorities are also hunting down, in a much more ruthless manner. It’s a zeppelin battle, a race through the Dutch alleyways, it’s alternate identities and fierce combat.

Beyond the strange terms, both multilingual and slang, the feature that took me the longest to get used to was the fact that the entire book is written in limited third person, present tense. It’s a style usually reserved for first-person narrators, but the fact that the present narrator focused on Alice and her experiences is not in fact a participant in the story, gives a strange sort of sense of an external observer recording these events, but transcendent beyond the specific time and space they are observing. That being said, the deeper I got into the mystery and intrigue, the faster I got used to this unorthodox method of phrasing.

I cheered, I gasped, I eagerly flipped page after page till I got to the end. All in all, Amster Damned delivered a rip-roaring adventure with lots of intrigue and heart, and I am definitely interested in pursuing this unique premise further as the series develops!
Amster Damned earns for itself a top-marked *****5 STAR***** rating, and I'll throw in an Upstream Writer Certified TOTALLY Recommended endorsement. If you like steampunk, aeroships, colorful characters, and don't mind some funny new words in your literature--the Time Flight Chronicles is waiting for you!