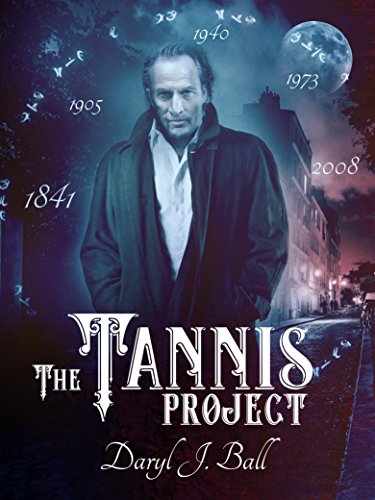 Being a nearly 200-year-old vampire comes with a lot of experience...and a lot of baggage.In his weekly blog, Tannis reflects on the experiences and people that have shaped his life, as well as his budding romance with single mother, Kayla. Adaptation ensures survival but offers little insight on falling in love with a human. Kayla accepts him and his struggles, but can he do the same? Her teenage son, Tie, is a challenge all on his own. He may not be ready for a new father, especially one who's a vampire.For the first time in his life, Tannis struggles to adapt. Do the rewards outweigh the risks? Having his own family seems like a dream come true, but dreams can just as easily become nightmares.
>>>>>>>>

I'll admit... I'm not usually keen on books where the protagonist is a vampire. Typically in the books I read, vampires are portrayed as monsters or twisted villains. Most of the books that feature vampires in a sympathetic light take the idea all the way into "romantic entanglement" territory, which sends me screaming for the hills more often than not. They're hot, they sparkle, they make fools of all humans they encounter, resistance is futile... blah blah blah!!

But Tannis?
Tannis doesn't sparkle.
Tannis isn't "eternally seventeen."
Tannis doesn't make a big deal about revealing all the deepest, darkest secrets of his identity to the whole world. (But he is quite willing to expose the vulnerabilities of lycanthropes!)
Tannis writes a blog.

The character presents (with the help of the amazing cover image!) as a sage old man desirous of setting the record straight about people's understanding of vampires. The way he puts it, vampires are just another cryptid, capable of many superhuman feats through earnest and reasonable scientific and medical anomalies that are simple and sensible enough to forestall one's disbelief, given that the entire lore is just centuries of make-believe.
Reading THE TANNIS PROJECT brought back everything that I loved about the show Grimm. Being in the format of a blog, the story was neither sensational, nor the action particularly gripping--but the wealth of information Tannis provides to his readers is definitely compelling, in an intellectual sort of way. The fact that Ball successfully pulls off "guest posts" from other characters and makes them sound different not only from Tannis himself, but from each other is another stroke in the book's favor. I found it fascinating and (dare I say) comfortable by turns. The different social connections among the vampire Houses and the lycanthrope packs got confusing, especially in the parts where few names were used... but I managed to make it through. I especially enjoyed the clear explanations of the more mundane features and habits of the vampires, and the touches of realism Ball adds as certain dates over the course of the blog coincide with some real-world tragedies that Tannis chooses to remark upon.

On the whole, I'd give this book a solid *****4.5 STAR***** rating. I quite enjoyed the quality writing, the patient, scholarly candor, and the way Ball brought each character to life in his and her own unique way. There wasn't any page-gripping peril (because the blog posts were pretty much all in retrospect... obviously they survived whatever situation they are describing!) or intense action sequences--but there were plenty of vivid emotions, fascinating twists, and intriguing information to beguile any reader! If you enjoy classic vampire lore, a quiet evening by the fireside, melded with family dynamics, trust issues, and a character with two centuries of emotional maturity under his belt, then you should definitely give THE TANNIS PROJECT a try! I know I'm definitely looking forward to the next Daryl J. Ball novel on my TBR list!