Reader's Review: "The Truth Behind" by Kelly Blanchard 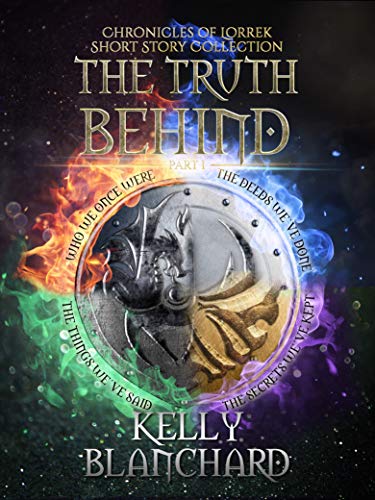 Synopsis from Amazon:
This is a collection of short stories that current before, during, and after the first three books of the Chronicles of Lorrek series. In it, more is discovered about the characters of the books, and events that were merely mentioned in the books are actually shown and experienced in these short stories.
>>>>>>>>>>>>>


Delightful! Want to know the next-best thing to reading another book in the series--or perhaps the best way to bide one's time waiting for the next book? Reading a short story collection! It's almost like reading fanfiction--only absolutely everything is totally "canon" because they are written by the original author!
Such is the case for The Truth Behind. As a writer myself, I can say with certainty that there is a lot that goes into developing a story, and events in the individual lives of key characters, all of which has a definite effect on the way a character responds and interacts, sometimes even in the way certain characters are unable to be in a certain scene, or arrive in time to perform certain actions--but when it comes time to edit, there just isn't reason enough to justify leaving the scene in the draft, so out it comes! Or perhaps (as was the case for me and Princess of Undersea!) there are times when the author has enough of a vague idea of the "behind the plot" event happening to reference it in the novel, but it isn't until much later that the idea coalesces enough to actually firm into a scene that explains exactly what happened... So what does one do with those?
If you're Kelly Blanchard, with her ever-expanding series Chronicles of Lorrek, you put them all in a collection of 4 novella-length "volumes" and bestow it upon your fervent fanbase.

These stories were an absolute joy to read, even if I've only read the first four books. Regardless, they opened my eyes to some of the references I encountered in the books without realizing their significance, and they answered some of the questions I would have as to "what really happened" in those events that had a profound effect on all the characters, but didn't receive a full explanation in the book itself. Fifty-two stories (one for every week of the year) would be a lot to go through, so for the sake of this review, I've gone through each of the "volumes" and chosen my three favorites!

Volume 1: Who We Once Were--Delving into the much-referenced history of the main characters, this volume very much served to provide the background for much of what happened in the first two books, especially as it pertains to Lorrek and his boyhood, coming into magic. My favorite stories were the ones featuring the assassin Vixen, and also the story arc that brought to light the details of the decline of Mordora's father, and how someone so connected to many magic-users could be so dead-set against magic of any kind... We get a glimpse of Mordora herself, who she once was, before the apparent acts of betrayal committed by those she trusted so much sort of soured the relationships she valued. Connecting her to the characters of Tobias and Aiden--both of whom showed up in the main series--did well in fulfilling the title of this collection (something Blanchard is fond of doing, and does very well, I might add)!

Volume 2: The Deeds We've Done--The collection continues with a slew of stories that just happen to pertain to certain deeds committed by certain characters--not the least of which is Loroth's relationship with Vixen--a prince and an assassin don't seem like they would get along very well, but the tenderness which grows between them, and the intensity of their commitment to one another shows very plainly in the choices they make for the sake of one another! This volume also focuses on another favorite character of mine, Ceras (yet another assassin--what can I say? They are some boss ladies!!) who ends up accomplishing some very important deeds in the main series--and my favorite story of hers is when she learns "the truth behind" (HA!) the unintended outcome of a choice she made long ago--and one she chooses to rectify any way she can! I also liked learning more about Atheta and her dealings with the Princes of Cuskelom, since the whole series essentially begins with the fact that she has disappeared and everyone is convinced Lorrek abused her and possibly killed her... a reputation he desires to redeem himself of. Some important deeds happened in these stories, with serious repercussions, and it's always important to know the truth!

Volume 3: The Things We've Said--If one's past and one's deeds are important, one's words must be taken into account as well! These stories feature characters making important declarations, or they are the true stories behind events referenced by characters in the main story--not the least of which is the infamous Rakessat attack that shattered the normal, everyday lives of all six kingdoms in one massive explosion in the Porta Cosmica. My favorite stories in this one were: "Torroth Visits Jechorm", where Lorrek's own father made an important choice that ended up with certain words and decisions being attributed to him, while he remained completely unaware of the agreements made in his name; "Roskelem Returns To Serhon", which provides a deeper understanding of just how far gone the mad king was, how much of his sanity was exchanged for obtaining power that should never have been his... and how much his ambition blinded him to the hate that was brewing in the corner from which he should have received the most support... And also I liked the conversation between Lorrek and his mother, after all is said and done, where she joins him in grieving over the effects of his choices, while at the same time expressing her belief in him. Just that one bit of support is the motivation and the strength he needs to keep him going on his journey to set things right. Wonderful!

Volume 4: The Secrets We've Kept--Possibly the best part of writing is all the little "secrets" that come out as one is developing the plot, secrets that have a profound effect on the plot precisely because no one character has all the information... and now, readers of the Chronicles of Lorrek get at least a small sampling of secrets that various characters knew long before some cataclysmic event brings them to light, or perhaps they never quite got explained properly then, but now here is The Truth Behind those mysterious, hidden deeds! My absolute favorite in this particular section was the whole batch of kept secrets brought to light concerning the entertaining duo Adonis and Skelton. Raised as brothers, they find out secrets about their past that create some very unexpected connections to other key characters in the series--and I am all here for it! I also very much enjoyed watching different characters learn more about the history of the kelliphs--information the readers learn through discoveries made by Lorrek and Radella in isolation over the course of Book 4, but no one else had learned much about it... until now. Secrets long kept are unravelling, some of them leading to more secret-keeping as those who reveal partial information choose to keep some for themselves... What the consequences of such choices might be, only time will tell...

Overall, this was a great collection and a fitting companion to the Chronicles of Lorrek series! I give it a full-on *****5 STAR***** rating, and an Upstream Writer Certified ASSUREDLY RECOMMENDED endorsement as well! If any of my summaries and references (which I tried to keep as spoiler-free as possible!) intrigued you at all, I strongly suggest starting the Chronicles of Lorrek series today, and let the magical worlds (and words!) of Kelly Blanchard sweep you away!