Reader's Review: "A Drop of Dream" by Amy Hopkins 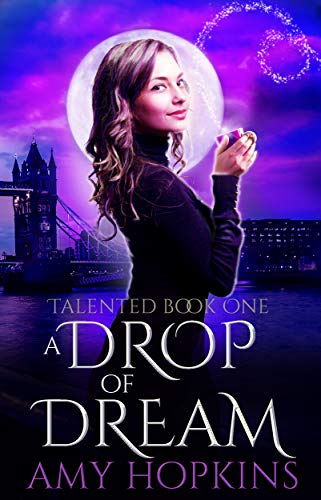 Synopsis from Amazon:
Fancy a cup of magical tea? Come in, sit down, relax. Don't mind the killer in the corner...All Emma wants is to sell her enchanted teas in peace; instead, she's caught up in the chase for a killer who's stalking the streets of London. He's targeting half-bloods, people with limited magical ability. People just like Emma.The police are baffled by the long string of deaths, but they're not willing to put in the legwork to make an arrest. After all, magic users can take care of themselves, right? Except, those with real power don't give a damn about half-bloods. So, when Emma wakes from a strange dream that nearly gets her killed in the waking world, she knows she has to deal with it herself.She's not alone. Gibble, her Boggart shop assistant has her back. But can she trust the two strange men that turn up on her doorstep, claiming they want to help?The sun is going down and the killer is just around the corner... and Emma had better find a way to stop him.
>>>>>>


Ladies and Gentlemen, yet another classification of magic exists in London! This one works more like your common, garden-variety spell casting, with wards, blocks, curses, wands, and the like. It's called Talent, and some have it, and some don't. Emma is a half-Talent, but she's managed to make the best of it by running a little tea shops where she enchants her brews with special enhancements, like "focus", "agility and speed," or "alertness." She also has clients from both sides of the spectrum, magical creatures like nymphs, trolls, and goblins, as well as normal people who just want regular tea. Assisting her is Gibble, a taciturn Boggart "inherited" from her deceased parents, who causes no trouble as long as he is supplied with books. And so it begins...
I loved it from the hectic "busy shop" scene at the very beginning. All Emma wants is to keep other people happy, safe, and supplied with her helpful teas, and yet she has been singled out by a Dream Stalker, someone with the power to invade someone's dreams. He's killed twice before, and now she is at risk. Talented brothers Harrod and Martin enter and offer their protection—something Emma resents at first. As the attacks escalate, and circumstances require not only traveling to the Otherworld, the realm of the Fae, but also attending a Talent-only gala event to try and identify the Dream Stalker—it is the brothers who end up proving their mettle and their willingness to accept Emma, rather than Emma taking their imposition as a challenge and a slight against her mixed blood and being all "tough girl" about it.
I loved all the characters. Emma and Gibble, the positively ethereal Fae, Barg the hobgoblin who only ever spoke in exclamation points, as well as the host of colorful and exciting neighbor's and customers around Emma's shop.
The mystery woven in it was so thick and well-paced that I never knew who it really was, but I sure as heck wanted to find out!

Beautiful, enchanting, and wonderful from start to finish. The dream sequences were suitably disjointed yet streamlined, the important character moments emphasized accordingly, the pacing will keep you guessing, and the interactions will be so marvelous, you will want the entire series to read again and again, just to prolong the acquaintance for as long as possible!

I would give Drop of Dream a *****5 STAR***** rating, and add that, if you're looking for a tale full of urban magic, London streets teeming with fantastic creatures, a hectic tea-shop run by a delightful heroine who would be everybody's friend (and especially yours)—this book comes with an Upstream Writer Certified WHOLEHEARTEDLY RECOMMENDED.
I cannot wait to read the rest of the Talented Series!