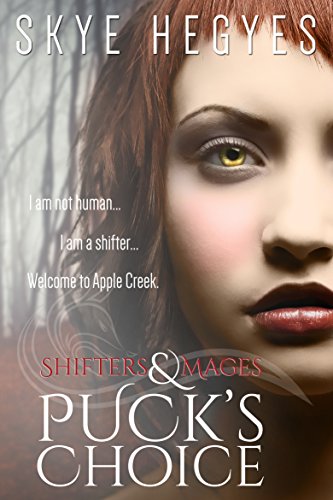 Synopsis from Amazon:
Puck Dupree moved in with her sister after spending over a year trapped in the form of a fox. She had hoped to move on with a normal teenage life; however, trouble seems to have followed her.

The Council wants her to partner with a mage or forfeit her life, a friend of hers has a stalker who may or may not be trying to destroy her, and a boy at school keeps watching her. If only she could decide if he wants to kiss her or kill her.
>>>>>>>>>


Got this one in the same book binge as about half a dozen other books. Reading books like Therian Way and watching shows like Grimm got me VERY attached to shape-shifter stories, and reading just the first few chapters of the sample made me fall in love with Puck as a character.

What is it about naming a character Puck that instantly makes them such a wonderful and likable character?

Skye succeeds in giving me a group of characters I care about. Jay and Iris, Cassie—even Fancy and Myles are great mentors for Puck and her friends. Even though at first it did seem like the "Disney Channel trope" of a girl recently moving to a new town and instantly being drawn to the dark, sulky guy... She does something wholly unexpected in the story and I absolutely thought it was brilliant: (MINOR SPOILERS AHEAD)

She brings Sulky Boy, aka Rand, out of his shroud of mystique. Rather than luring Puck into the darkness and her having to fight her way out or "embrace the shadows" or somesuch tripe, Rand comes out of his shell, the more he comes into contact with Puck. That was probably my favorite part of the whole thing; it kept me from disliking him too much to see past his broodiness, so when the relationship deepens, he winds up a pretty likable character. They all do.
Puck makes actual friends and allies, and she meets people who not only understand a bit of what she experiences as a shifter, but also accepts her the way she is. Contrasting that with people from her past who rejected her and refused to understand, someone who actually blames her for something over which she had no control—a menace out for her blood.

It's a delightful romp with lively, memorable characters and plenty of suspense—to say nothing of spectacular twists you won't see coming! Granted, there were some places where the storytelling kind of wandered a little, and then of course there were the "necessary cliches"--but on the whole, it was a pleasant experience, and relatively quick, easy read. I would certainly give PUCK'S CHOICE a hearty ****4 STAR**** rating, and add that if you are looking for a fascinating, light, mid-grade/YA adventure full of magic spells (yes, witches are sympathetic characters here, akin to the sort one finds in Harry Potter) and shape shifting teens, PUCK'S CHOICE comes with an Upstream Writer Certified CERTAINLY RECOMMENDED endorsement—and I am very much looking forward to the sequel!