Reader's Review: "Guity By Association" by E. A. Copen 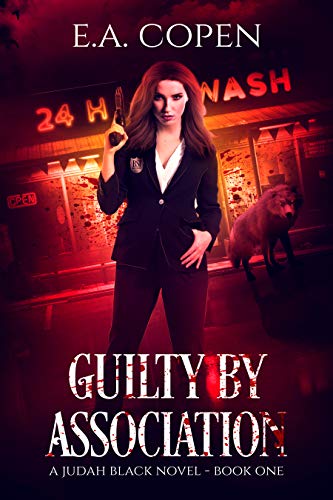 It takes more than a badge and a gun to police a supernatural reservation.
Special Agent Judah Black is no stranger to tough cases. Her unique ability to read auras has helped her close plenty of them in the past.

But the slaying of a werewolf on the Paint Rock Supernatural Reservation is unlike anything she’s ever seen before. No witnesses, no identification on the victim, and no motive. The only clue is a black magic stain on the laundromat where his body was found.

With rumors flying around town about covert government experiments in the desert nearby, and finger pointing between werewolves and vampires, unraveling the truth in this case isn’t going to be easy.

Will Judah untangle this web of lies and deception before the murderer claims another life? Or will she find herself in the killer’s crosshairs?
>>>>>>>


If there's one thing I've learned since starting this regular business of featuring indie authors, it's that I love paranormal investigation novels. The really good ones are marked with a tone that speaks to the volume of research that goes into crafting the lore, most of which will inform the appearance and actions of the characters—but in actuality the bulk of this research is never directly stated in the book. They can also manage to work it into the narrative at key points over the course of the plot, rather than one rambly, "Here Is Everything You Need To Know Before We Get To The Climax" info-dump.

This is one of the good ones!
The main character, Judah Black, is exactly the sort of gal you would like to be friends with—more because her tenacity would make a truly terrifying enemy. She's not really a paragon, not particularly strong or overly knowledgeable, not overly virtuous or patient—but she is equal parts smart, empathetic, and loyal. I liked her best of all because she wasn't your basic Main Character who is secretly the Author's Pet, which means the whole story is going to obsess over their tortured virtue and noble misery, which you cannot relate to, so inevitably you will find someone in the support cast to adore, and the main character can go fall on a sword somewhere.

Like I said, this isn't Judah. She is relatable from the very first moment: she's come to Paint Rock as the next in a long list of new "homes," it's purely a job for her, she's come off a bad breakup with her son—and suddenly people are stonewalling her at every turn. And there might be kids involved—so of course she worries about her son. She worries about her job, and how it might look if she continues to meet failure after failure, but the more she pursues the case, the more it becomes clear that she is probably not leaving Paint Rock Reservation for Supernaturals anytime soon.

Oh yeah, now we get to the supernatural aspect. Paint Rock is pretty much the only "safe" (albeit government-sanctioned) place left for vampires, werewolves, and Fae, to name the principal "families" running the place. Judah works for the Bureau of Supernatural Investigations. Since the victim was a werewolf, she interacts with a lot of that species—but since the community is rather small, the effects of the murder are widespread, so the reader is treated to glimpses of other supernaturals, like the androgynous Fae who runs a night club, or the vampire who owns the 24-hour laundromat. Judah, herself, is sensitive to the "feel" of magick and knows some minor spells, but she's thrust into the path of unscrupulous enemies who hold far more power than she has ever encountered.

It's a grand tale packed full of breath-catching action, gut-wrenching feels, peppered with moments of light-hearted fun. The characters are vivid, bodacious, intriguing and wonderful. The feel of the lore is absolutely comparable to another urban fantasy favorite author of mine, R. R. Virdi. The pacing makes it hard to put the book down, because just when the case seems to start heading in the right direction, something happens to pull you right back in. I loved getting introduced to Judah, her family, and the werewolf clan that has taken them in, and I am definitely in the mood for more of this wonderment!

Absolutely I would give this book a full *****5 STAR***** rating, and add to it an Upstream Writer Certified Recommended endorsement. If you're looking for a kick-butt woman who cares about all the right things, and you like shows like Grimm and Supernatural, with all the urban legends and mythology that fuel their stories, then Judah Black is DEFINITELY your girl!