Since these tales were considerably smaller than your average novel (and I basically finished two of them over the weekend, I decided to compile them all together into one post. 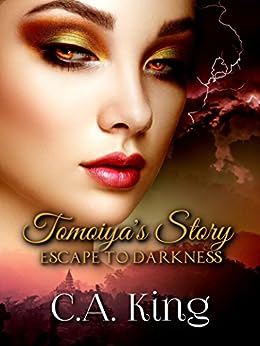 This series is the perfect addition to any Vampire fan's collection.

Space travel. To some it is an advancement; a way to meet new races, learn new traditions; explore new cultures - a chance to expand the mind with knowledge of the unknown. To others, it is nothing more than a new outlet of resources to exploit and destroy. To the naive and trusting it is a recipe for disaster. The question of whether or not venturing into the realm of the stars is worthwhile, is a topic that will be argued for generations to come.

The Universe - vast and never ending. It recycles within itself. What happened before comes full circle and occurs again. Some call it fate - others destiny.

Two stories - one written in a book - the other about to begin.

Escape To Darkness tells the tale of Allaynie, a vampire whose tears are worth a fortune. A chance meeting on her wedding day changes her whole existence.
and
Woden, a man to whom greed is merely good business. Hunting is his trade. He'll do anything to collect her unique tears for profit, even chase her into darkness.
>>>>>>>>>>>>

My Review:
I got this book in a bundle along with the first couple books in her other series as a giveaway. I wasn't sure what to expect, but at least I knew there were going to be vampires. I'm not typically a huge fan of that trend, but I decided to give it a try.

I am glad I did! It's not just vampires; it's a whole alien race that is misunderstood by most and hunted down by the rest. She takes the typical vampire lore and turns it into something heart-wrenchingly lovely. We cheer for Allaynie, and shiver whenever Woden is mentioned. I liked it because, as short as it was, it still had plenty of food for thought and inspiration for imagination!  The story carves deep into the nature of prejudice, and the lengths some people will go to get what they want at the expense of someone else. It feels like a prequel to something grand and amazing, because it is. Tomoiya's Story is a series about to begin!
Genre: Paranormal Urban Fantasy
Rating: ****
<<<<<<<>>>>>>
Burn Artist (Hound of Eden #0.5)
James Osiris Baldwin 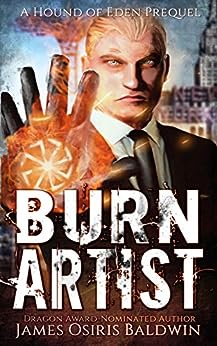 Synopsis from Amazon:
When stuff gets too weird for the Mob to handle, hitmage Alexi Sokolsky is the guy they call to fix it.
1986, New York City. The Russian Mafia is neck-deep in a Wall Street heist worth millions, but things heat up when a mage from a rival gang is hired to force the Russians to back down from the deal. As the magic flies and men burn, Alexi must hunt the murderer in a feverish game of cat-and-mouse – not only to protect the Organizatsiya, but his friends and family as well. The only thing is, to honor his contract, Alexi must also save his worst enemy.

Set 5 years before Blood Hound, Burn Artist is a prequel to the series which reveals more about Alexi’s past. What were the events that shaped him? Why did he murder his own father? And what are his true feelings for his best friend?
>>>>>>>>>>>>>>>>
My Review:
After reading Blood Hound and largely enjoying it (except a few really trippy parts that went too far down the rabbit hole for my tastes!) I went ahead and signed up for Baldwin's mailing list, which meant I got this novella for free!
All that aside, this one made me really excited. It was like a story boiled down to the elements I actually enjoyed about Blood Hound—Alexi being a wizard, tapping into powers and abilities to be able to fight malevolent entities, but also Alexi as a person struggling with how to connect to the people and the world around him. Actually getting to see his interactions with his father help me understand his deep-abiding resentment that still affects him in Blood Hound. And watching him interact with repeat characters, already knowing what secrets they hide that will be revealed later, but for now Alexi doesn't know... Well done. I was very pleased with this story!
Genre: Paranormal Urban Fantasy
Rating: ***** 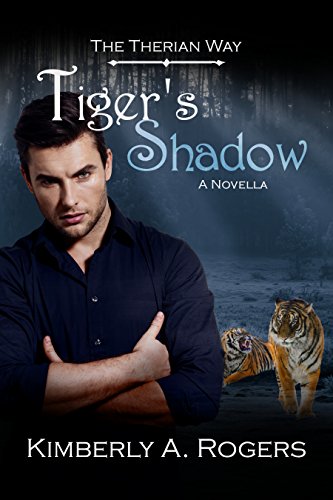 Synopsis from Amazon:
It’s not easy having an older brother. It’s worse when your brother is the paragon of the Therian Way. Madoc knows he can’t live up to his brother’s reputation. Sometimes the only way out of the Tiger’s shadow is to rebel . . .
>>>>>>>>

I saved the best for last! Only because out of the three novellas in this post, I am already an obsessed fan girl over the Therian Way series.

I will read anything from this series. Absolutely ANYTHING. It's another prequel novella, so dealing with the way things were before Baran met Raina... but it follows the trend of "dual narrators", dividing its points of view between Baran and his brother Madoc. Madoc is resentful of the way his brother adheres so strongly to the Therian Way—but not in the same "loosen up, Tiger!" way that Raina is. While Raina wants to see Baran relax to not be so hard on himself, Madoc just wants his brother to leave him alone, wants to get away from the pressure of always being overshadowed by Baran's "religious perfection", and most of all, he's not handling the guilt and the rebellion very well. I see it as introducing his character into the established timeline of the main series, and I am VERY excited!
Genre: Urban High Fantasy
Rating: *****
<<<<<<<>>>>>>>
Be sure to check out the Reader's Reviews page for more literary goodness!