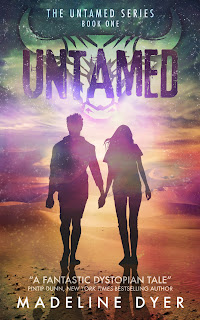 Synopsis from Amazon:
As one of the last Untamed humans left in the world, Seven’s life has always been controlled by tight rules. Stay away from the Enhanced. Don’t question your leader. And, most importantly, never switch sides—because once you’re Enhanced there’s no going back. Even if you have become the perfect human being.

But after a disastrous raid on an Enhanced city, Seven soon finds herself in her enemy’s power. Realizing it’s only a matter of time before she too develops a taste for the chemical augmenters responsible for the erosion of humanity, Seven knows she must act quickly if she’s to escape and save her family from the same fate.

Yet, as one of the most powerful Seers that the Untamed and Enhanced have ever known, Seven quickly discovers that she alone holds the key to the survival of only one race. But things aren’t clear-cut anymore, and with Seven now questioning the very beliefs she was raised on, she knows she has an important choice to make. One that has two very different outcomes.

Seven must choose wisely whose side she joins, for the War of Humanity is underway, and Death never takes kindly to traitors.
>>>>>>>

My Review:
This was a book I bought on one of those "Only Spend Gift Card Money" buying binges... I swear, it's the only way to ration myself; I could very easily just go broke with how many awesome writers there are out there.
So anyway, this British writer is not a frequent poster in the group where I most frequently pick up indie books for these featured reviews, but everybody keeps mentioning her book, and so I added it on a whim to my watchlist, waiting for a gift card to spend it on. I got the card, I bought the book, and finally, I get the chance to sit down and read it.

This book just about destroyed any semblance of productivity in me every time I picked it up. Two nights of staying up WAYYY past my bedtime and one afternoon of completely ignoring my chores, and I reached the end. I couldn't just read a few chapters here and there. I was blowing through whole chunks until I had no choice but to set it aside and move on with my life. That's how compelling it is.

It starts out sounding a bit like Scott Westerfield's "Uglies", like there's the "in" society of drug-sucking "perfect people" who become plastic, "perfect" superhumans by taking addictive drugs that suppress negative emotions and enhance the senses; then there are the outsiders, the Untamed, who want nothing to do with this life, they want to be free, to survive.
But that's where similarity ends. "Uglies" got too wrapped up in conspiracies and sappy romances and love triangles to hide weak characters. "Untamed" was just getting started.
Seven is an Untamed who lost almost all of her family to fighting the Enhanced except her brother Three, and whose mother may or may not have betrayed her team and chosen to become Enhanced. Seven travels with Rahn and his nephew Corin, the self-appointed leaders of a band of Untamed trying to find a safe place to settle and survive. Meanwhile, there's something special about Seven, something that has to do with her mother being one of the Enhanced, giving her a natural "in" with them, but also something that makes it dangerous for her to just give up and give in. She is on the run between two worlds; if she stops running, she dies.

Betrayal around every corner; her closest friends might be wise enough to defend her from the darkness inside herself—or trusting them could mean her undoing.

Dyer's characters leap off the page, each with his and her unique voice and face clearly etched in my head. The plot, as I stated before, just didn't let up for a moment. It got a bit disorienting at times, particularly with the visions and dreams Seven keeps having, but I did note that these were always explained afterward in a way that made sense. The twists and turns kept me frantically turning pages to find out what happens next. And even then, I could never once predict the outcome. The dialogue flowed naturally, the conflict made me breathless, while at last, I sighed with relief at the stunning and incredibly fitting resolution.

Untamed is a sheer thrill ride from start to finish. Readers looking for a female character with realistic struggles and not too much romance, a dystopia with an important message of hope, and an epic new world to discover will not be disappointed!

Untamed is absolutely worth the price of admission! I give it the full *****5 STARS***** and add an Upstream Writer Certified ABSOLUTELY RECOMMENDED! I am definitely looking forward to the sequel!