Reader's Review: "Beasts of Babylon" by E. A. Copen 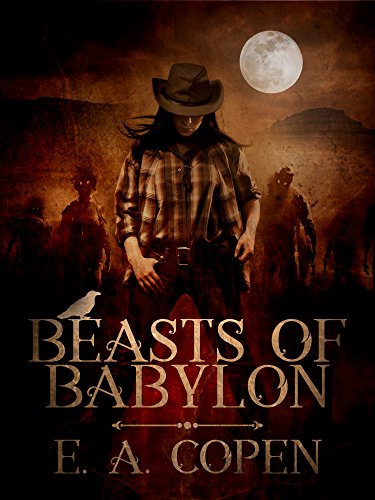 Ten years ago, monsters murdered Anastasia and her children. Now, she’s back to hunt down the monsters responsible. She knows their names, their faces, and even where they’re hiding.

There’s just one problem. No one in town believes her.

When the sheriff refuses to help, Anastasia strikes a deal with the notorious outlaw, Jesse Gallagher instead. The pair ride into the mountains in search of vengeance, but the hunters quickly become the hunted. With the sheriff hot on their trail, ghouls on their heels, and werewolves and skin stealing monsters in the mountains, Jesse and Anastasia quickly find out they’re outgunned and in for a long night.

Wow! This book is an amazing whirlwind of emotion, folklore and peril! Beasts of Babylon tells the story of Ana, a woman who cannot die, and her efforts to hunt down the monsters who killed her child in front of her. The fact that her former husband is the sheriff of the quiet little town of Babylon, and a stickler for the law, doesn’t help her case much.
E. A. Copen is a master at creating sympathetic emotions in her readers. This novel is a bit on the short side, but it packs quite the punch! I felt every death, every wound, and the shock of every resurrection. The vivid descriptions of the monsters gave me chills. All the mistrust, misdirection, and suspicion when the characters couldn’t be sure anyone was who they said they were… Heck, it had me reading some parts over again, trying to see if I missed anything, or if I could figure it out in spite of the confusion! And the conversations and interactions between the different types of characters: the law-abiding sheriff, the reckless rogue with nothing to lose (she thinks), the thief with a healthy sense of honor and duty—each one gave ample food for thought.
A second strength of Copen’s is the amount of research evidenced in the lore she writes. It’s steeped in the traditions of early civilizations to a credible degree, which makes it all the more fascinating and tangible to read. It’s dark and intense, but absolutely worth it if you can stomach the amount of violence and disturbing imagery!

BEASTS OF BABYLON gets *****5 STARS***** from the Upstream Writer! The plot, the premise, the characters, the dialogue, and the conflict and resolution all hit the right spots—this book is definitely as un-put-down-able as they come! If you’re a fan of dark, urban, paranormal adventures, you don’t mind some blood or dismemberment, and you’d like a book with solid characters that’s easy to lose yourself in for a few hours—BEASTS OF BABYLON fits the bill, for sure!