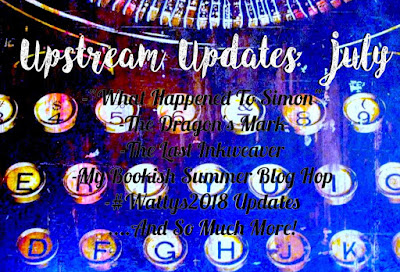 Greetings to all my followers! I hope your summer is going well. Mine is definitely shaping up! I do believe July will be my most productive month thus far!

What Happened To Simon: A Princess of Undersea Reviewer Tribute Story

First things first, this story is pretty much finished—namely that I cannot write any more of it until the last two reviews come in—so if you haven’t reviewed it yet, I strongly encourage you to do so! I think those reviewers I attributed rather enjoyed the characters I made for them—you would, too! I’ve posted the first bit of the story on Facebook—follow this link >HERE< to read it, if you have an account.
A bit about it: Those who have read my novella might recognize Simon as one of the young men in Prince Nathan’s patronage, and also a participant in the ill-fated boating “accident” that quite literally threw Nathan into the path of mermaid princess Ylaine. One of my early readers pointed out that it was kind of unfair to introduce Simon and allude to a rich backstory, just to kill him off immediately afterward. This reader wondered what might have happened if Simon also survived, but nobody on Overcliff knew it. It took a few months, but I hit on an idea, and with the addition of throwing in characters based on my first 10 reviewers, I am finally able to reveal What Happened To Simon.

Oh boy! I am so excited! My dragon-infused rendition of Cinderella is nearly finished! Granted, it’s about a month too late and more than twice as long as it was originally intended to be... but I am very pleased with the outcome and I cannot wait to share it with you all!!
A bit about it: If you were following this blog back in 2014, you probably saw when I posted “The Suggestion Box, Volume 2!” Otherwise known as “The Legend of the Ecrivaine,” it used the randomly-generated (from willing friends and acquaintances) lists to tell a continuous story of an unsuspecting girl who gets swept up into an adventure full of intrigue and lost rings and a dragon that needs to return to his own dimension. It was VERY fun to write, and I am happy to report that the parts I re-purposed for my Cinderella story (namely the Dragon, the lore behind it, the Dragon’s Mark concept, and the Ring) fit incredibly well, and though the first few parts might sound familiar to those who have read The Legend of The Ecrivaine, (or who will go back and read it at some point during the perusal of this blog post), bear with me because once the main character shows up, things are going to get quite a bit different! A few ideas I added are the setting, a small, fictional town in Southern Italy in the 1920’s/1930’s (because they talk about The Great War) governed Mafia-style by a large extended family, and all the residents must abide by the Family’s Rules and swear fealty to the Family; also, my main character, Stella, is shunned and despised because she has this strange skin condition that looks like a cross between dry skin and dragon scales. It scars and warps her features—but nobody can explain where she got it from. Fun times!

After a couple weeks where I battled to get this one rolling again, we’re finally back at it! It's kind of amazing how the new "courtroom" scene played out--not quite the kind of involvement that I thought Callista would have, but it worked pretty well--I just have to make sure things don't get too incredible in an upcoming scene, or I just might have to go back and rewrite what I've already done. The amazing thing is that I've had to subdivide the same chapter twice--when I made the plan, I didn't realize just how much stuff was going to actually happen, and how much time various conversations take... But I don't mind! The word count is creeping up there, and it's all good!
A bit about it: Poor Callista is having a tough time believing in the purpose of her journey and facing the consequences of her choices as following Morgianna’s advice leads to her being publicly humiliated, she rejoins her friends to discover that they’d sold most of the clothes she brought along with her, and they are no closer to catching up with the convoy. Despair is setting in... But all is not lost! They’re about to receive help from someone who knows about the Wordspinners, so perhaps this will motivate Callista to continue tracking down the Inkweaver!

This summer’s blog hop is underway! For your convenience, I have linked all the corresponding questions in the [Introductory Post] so if you haven’t seen it, want to get caught up, or maybe even answer the questions and get in on the discussion, feel free!
The reason I enjoy doing blog hops is because of the networking aspect. I get to answer questions on my FAVORITE TOPIC, I get to find people with similar tastes to mine, and I get to support bloggers like me. I know how discouraging it can get when it seems like I write something that I think is cool or fascinating, and post it, and it gets either very few views, or lots of views with no responses. I love interacting with other readers, bloggers and authors!
I am hosting another post this Friday, which just means that maybe I'll delay "Flash Fiction Friday" to Saturday... No big deal, I know, just a heads-up for those who actively follow my blog!

I am officially (still, as of this post!) over my word count goal for today! This is why I am so thrilled to be giving this update—it’s exactly what I’ve been trying to do for four months now! I am definitely going to be able to achieve this month’s goal—and then, let’s hope I still have enough going on that I can maintain that lead going into August and back to work! It’s been really fun to challenge myself, and I think a large part of being able to do this is my strategy of setting a daily writing time. Granted, on a full-time work schedule I might not be able to have this much time to spend, but at least, with forming this habit, and having enough projects to keep the words flowing, I should be able to at least continue writing consistently, even if I may have to diminish my goal over the months.

Holy smokes! It’s #Wattys season! From June 1 until August 1, Wattpad authors can designate various eligible stories to compete for the coveted #Wattys2018 award! As I mentioned last month, I have 3 stories in the running—if you or someone you know uses Wattpad, please be a good friend and share this post with them, so that they can vote for my stories!

In the last month, I completed the Grimm/Supernatural crossover KEEP PORTLAND GRIMM, started posting the first of an old series A WRITER’S TALE #1: THE DRAGON’S QUEST, and just this weekend I launched a new(old) fanfiction, the first one I ever wrote for the show Grimm, called READ BETWEEN THE LINES. That one in itself isn’t very long, but immediately after it, you’ll have the sequel, FAIR TRADE to look forward to!

I may have had only one review posted in June, but I was successful in completing an “indie book” early this month (review is >HERE<) so that leaves me plenty of time to get another book read! The book I finished just last week was Dreamtime Dragons, which, as some of you know, contained my short story, “Arthur and The Egg.” I took this opportunity to read the other submissions and holy moly! You’ll just have to read the review to find out what deliciousness is in store for you! Currently reading Beasts of Babylon by E. A. Copen. If that name looks familiar on this blog, I have read and reviewed the first book in her urban fantasy/ paranormal investigator series, the Judah Black Novels. (That review, for Guilty By Association, you can find >HERE<) I really loved it, and I’m already intrigued by some of the characters in this new book, which leans more toward the horror genre, so I am really looking forward to what this adventure has in store! My goal is to have 2 more books finished by the end of the month, bringing this month's total Reader's Reviews to THREE!

Books On My Nightstand 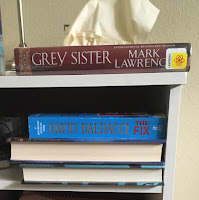 Yep, that’s 2 books out of 4 finished! I finished reading All the Crooked Saints by Maggie Steifvater (every bit as full of heart and intrigue and magic as her Raven Boys Cycle!), and End Game by David Baldacci, the fifth book in his Will Robie series. Electrifying and gripping as ever! Coming up next, I am currently right in the middle of Grey Sister by Mark Lawrence, the second book in his Books of the Ancestor series—and his first with a female MC, and he’s doing a fantastic job of it! Nona Grey is equal parts compelling and frightening—and Keot keeps things interesting! After that, I’ll round it off with The Fix, another David Baldacci book, this time returning to his Amos Decker series—because why not? Always fun to see the world through the eyes of such a special mind as that character has!

So that’s where I’m at so far! Feel free to ask me any questions, or share what you have going on!

Catch You Further Upstream!
Posted by Leslie C at 11:21 AM