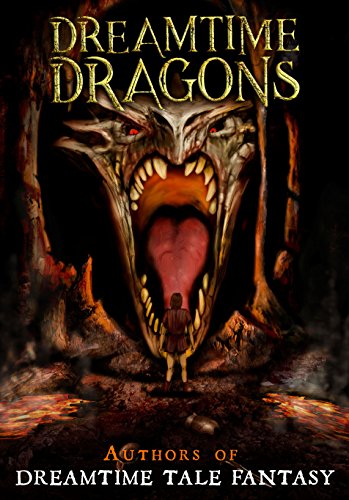 Synopsis from Amazon:
Stories, drabbles and sample chapters; the Dreamtime dragon authors are a collective of storytellers brought together by their love of Fantasy in all its guises.

Travel the Wyrde Wood with a giant wyrm or defend a pod of humpback whales with a dragon, explore the deepest goblin caverns, search for a dragon egg in the midst of a Viking raid or in a post-apocalyptic city where five gold coins is the price for the prize you seek!

Humour, drama, mythology and more await in 12 stories and drabbles, plus 8 novel excerpts that will lead you to your next great Fantasy read! Find the Dreamtime Dragon authors on Facebook in the group, Dreamtime Tale Fantasy! ALL proceeds have been pledged to the Abington Ferret Refuge in Northamptonshire.

Oh wow! This was an amazing ride! I am so glad I get to be a part of it!

A few years ago, I was invited to join a group of fantasy authors, several of whom I had read by then. It was fun to expand my network, and I enjoyed picking up new books and discovering all the amazingness this group had to offer, plus getting and giving critique between each other always ended up very good-natured and encouraging!
Well, early last year the admins put forth the idea of compiling a themed group anthology. We decided to use it for charity rather than profit, and everybody both contributed a piece, whether a short story, a one-page drabble, or a sample chapter from an existing novel, and each of us agreed to help with the editing process. Thus DREAMTIME DRAGONS came to be, and while I had read a couple bits, I had no idea the breadth and the scope of everything taken together! Seeing them all within one cover has me very proud and exceedingly pleased! For the sake of this review, I couldn’t review all the stories, but I chose the ones that stood out to me the most.

The anthology kicks things off with a rambunctious adventure in 101 Uses For a Dragon by Nav Logan. It was one of the works I read for editing, and I was giggling then and I giggled again! It reads like a Terry Pratchett story, full of heart, charm, intrigue, and a heavy dose of satire. Also included is Free Will, a sample chapter from one of his novels—and it drew me in very quickly, I enjoyed the characters and the premise it introduced! This one is definitely going on my Author Watchlist!
The ones I found really fascinating were the stories that actually told things from the dragon’s perspective, as was the case with Guy Donovan’s submissions, two sample chapters from two different novels. Shandikhaar brought us into the mind of a female dragon intent on protecting her nest from the two-legged “vermin” after the death of her mate, while Biters gives readers a glimpse into the relationship between air creatures and water creatures, centering on a dragon who spent some time living among a pod of whales, swimming in the water. Very enchanting!
Hauling Fire by A. J. Noon was a quaint, funny little story about two bumbling cargo-movers tasked with delivering a crate with mysterious contents to a wizard—but the trip is far from smooth. I enjoyed the two humorous short stories from Assaph Mehr, an author I’ve enjoyed before: Modern Dragon puts a keenly “hipster” twist on the traditional legends, while The View From The Other Side reveals a peculiar disparity between how we have been taught to fear dragons, and how dragons actually feel about “vermin” invading his home and “stealing his bedding.”
The short story I particularly enjoyed was A Soft Spot For Dragons by Marc vun Kannon. Anybody who loves those tales relayed as if from parent to child, anyone who carries nostalgia for a good, imagination-rousing bedtime story—needs to read this story! I loved it all the way through.
Last but certainly not least, (since this review has to end somewhere or I would just keep writing and raving about all the great stories that this book contains!) the works of Nils Visser. The sample scene from Escape From Neverland, I had already read (The Wyrm on The Tarn), but the short story was new: Freósan Draka Treów, an in-depth look at one of the legends hinted at in a conversation between characters. Oh man! His use of Old English really sets an ancient tone over the whole thing, and the way he describes the fantastical events and enthralling scenes will haunt your daydreams once you read them!

It is my genuine pleasure to grant this anthology a full *****5 STAR***** rating, and of course an Upstream Writer Certified ABSOLUTELY RECOMMENDED endorsement. By the way, this is the anthology for which I finished the short story “Arthur and The Egg”, so if you’ve seen that here on my blog and you wanted to find out how it ends—let that be another great motivation to buy the anthology! If you like dragons and you want something new, fresh, and enchanting to read—DREAMTIME DRAGONS is here for you!