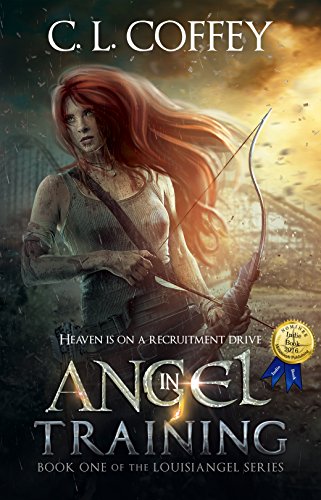 After a night out turns fatal, a misunderstanding with the Archangel Michael presents Angel with a chance at Eternal Life: the opportunity to earn her wings and one day become an archangel herself.

Angel is given the task of protecting her charge, trainee detective, Joshua Walsh. There's no denying the attraction between Angel and Joshua, only Michael has pretty strict rules: no drinking, no drugs, and certainly no relationships with humans. Thankfully, she's got other things to deal with, like trying to convince Joshua that New Orleans has a serial killer who is preying on other angel potentials like herself.

Angel must quickly learn that when keeping someone safe, doing the right thing is not always the easiest, especially when you've got an archangel looking over your shoulder.
>>>>>>


At first glance, it seems like your typical supernatural romance. I confess, going into it, that was what I feared might come of it. I won the whole series (thus far) in a giveaway, and a little part of me worried that I might be in for something typical: bad girl becomes guardian angel, falls in love with her super-hot charge, and sticks it to the man—er, archangel—when she defies the rules in the name of love.

What I got was so much more.
Coffey is now among my favorite authors. Angelina is not your typical "Skanky Sue" (like a Mary Sue, except the "perfect bad girl" instead of the "perfect good girl"); actually, she comes off as your typical, everyday agnostic: she doesn't go for "that religious stuff" and she lives for herself, for the moment, without paying much attention to her surroundings—which is exactly what gets her killed. And she proceeds to respond time and again in exactly the way "we" the readers would respond: she has all kinds of questions, no context for her new life, she's confused, sarcastic, and completely lost in all of this, thrust where she really has no business being. And there is a war coming. And people and angels alike are depending on her. And she is more conscientious of the rules now than she ever had been in life. She's not a "bad girl"; she really does want to get it right... It's just that somehow she missed "Step 1" of the whole "How To Transition From Mortality To Angelhood" so she has to get caught up somehow in any way she can.

I loved every part of this book. The premise came off really well, without a huge info-dump except the one scene that actually knows it's an info-dump, and Angel is suitably confused by it. The characters—not just Michael, Angel, and Josh, but a whole host of side characters: Cupid (also called Kurt), Veronica the cherub (cherubim in this book are not what you're thinking...), Mama Laveau, Aunt Sarah, Leon, Maggie—each one completely unique from the rest, and all of them relevant enough to be compared to somebody we all know in our lives. These characters are realistic, vivid, and they leapt off the page in full color as I read.
The plot hustles forward at a steady pace, not too slow, but not too convoluted and bogged down by too much minutiae to justify, discredit, or re-explain, and entirely without a painfully obvious disdain for religion, or one in particular—which I definitely appreciated because then I could actually enjoy the story without feeling like I was reading a monkey trial.
The conflict itself is bigger than just Angel versus Michael (which, though it's hinted in the blurb is **SPOILER ALERT** actually not really the central head-to-head conflict of the plot, and they do actually work it out like the adults they're supposed to be; GOOD FOR THEM!) and the mystery of the enemy going around killing Angel Potentials like Angelina (trying to avoid the "Angel the angel" jokes, here!) is teased out nicely, just like in the crime novels and cop shows I like so much. Throw in a backdrop of another hurricane coming so close on the heels of the last one (it being Louisiana, they're still recovering from Katrina when another blows in) and a whole mess of Fallen angels trying to wage war against heaven itself—and this series is a definite win on all fronts.

Pretty much I am going to to give ANGEL IN TRAINING a full-blown *****5 STAR***** rating, and add to it a Upstream Writer Certified Totally Recommended endorsement. Looking for something really good to read that's a little urban fantasy, a little "buddy cop", with a great heroine and supporting characters to get obsessed over? Then don't miss ANGEL IN TRAINING and the rest of the Louisiangel series!
Further Reading: (Supernatural/Urban Fantasy/Excellent Female Lead/Irresistible Plot)
-Bounty--J. D. Cunegan
The Vemreaux Trilogy--Mary E. Twomey
-The Way
-The Truth
-The Lie
-Sky Knight--Sandra Harvey
-Dissolution--Lee S. Hawke
Lord of the Wyrde Woods--Nils Visser
-Escape From Neverland
-Dance Into The Wyrd
The PSS Chronicles--Ripley Patton
-Ghost Hand
-Ghost Hold
-Ghost Heart
-Ghost Hope
-Dream Stalker--Amy Hopkins