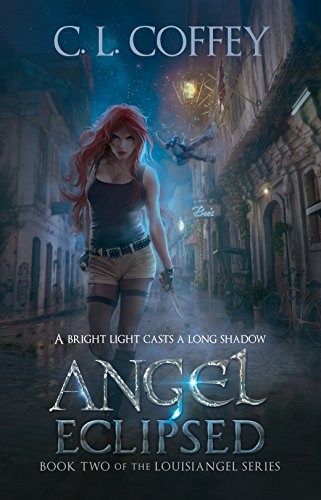 Michael doesn't accept that Lucifer is alive, let alone free, and he should know – he was the one to kill him. Thankfully, Veronica and the cherubim are on her side, only they seem more interested in proving Michael wrong than helping put Lucifer back in hell.

Then there’s Joshua. Angel is convinced that the best way for her charge to stay alive is for her to stay away. The problem is that Michael is adamant she remain his guardian angel.

Can Angel keep her charge and New Orleans safe from the evil that is lurking, or will her own demons be their downfall?
>>>>>>>>>

Wow, what a ride!

Even though it's been more than a year since I read the first book in this series, I had no trouble leaping right back into the story. My love for the characters rekindled just as strongly as it had been the first time, and even more so, since Angel and Joshua seem to be getting closer--even as Angel is wracked with guilt over what had happened to him the last time she let him get too close to her. But what else can she do, as his guardian angel?
The challenge to write a strong sequel that both advances plot and character development and manages to leave some plot for the rest of the series, while not stagnating in the process, is a difficult one--but Coffey meets it head-on, and provides consistent, well-rounded characters meeting some perilous conflicts while in the process of furthering the objective introduced in Angel in Training.

The thing I love most about this series is that it follows the characters through some real-life struggles, most notably the "Imposter Syndrome" everyone can relate to, that nagging self-doubt that wonders if the effort is worth it, if you've made the right choice--whether you ought exist at all. Angel is questioning why she should be Joshua's guardian angel; Josh is questioning why he needs a guardian angel at all, and what part he could possibly play in the Grand Scheme; plenty of others are questioning Michael's leadership, as it seems their enemies know how to exist outside of his hitherto-unchallenged omniscience. There were reveals that had me slapping myself for not realizing the significance staring me in the face the whole time, and that's the brilliance of Coffey's work. The plot stands strong, the stakes are higher than ever, the angels are closer than ever before, though the enemy seems leagues ahead of them every step of the way--and I am absolutely committed to seeing this series through to the end!

It is entirely without reservation that I give ANGEL ECLIPSED a full *****5 STAR***** rating, and once again add an Upstream Writer Certified Totally Recommended endorsement! If you're looking for a paranormal series that's not all about teen romance, or overburdened with extreme peril merely for drama's sake; for a solid series with excellent characters, a plot that keeps you guessing, and an intensity that won't quit--The Louisiangel Series is a sure bet on every front!