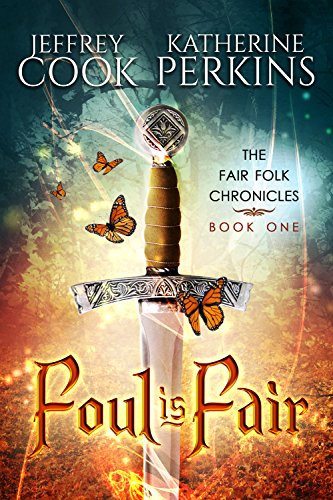 Synopsis from Amazon:
Lots of girls play Fairy Princess when they're little. Megan O'Reilly had no idea the real thing was like playing chess, guitar, and hockey all at once. Megan had known for a long time that she wasn't an entirely typical girl. But living with ADHD—and her mother's obsessions—was a very different thing from finding out she wasn't entirely human. Somewhere out there, in a completely different world, her father needs help. There's a conflict, revolving around Faerie seasonal rituals, that could have consequences for humanity—and if Megan's getting the terminology straight, it sounds like her family aren't even supposed to be the good guys. As she's further and further swept up in trying to save her father, Megan may be getting too good at not being human.
>>>>>>>


I love it when fantasy writers delve into the unexpected whimsy of the genre.
All of these things can be said for "Foul is Fair." Megan is a girl struggling with ADHD, having to take pills that make her docile and hazy, but don't do much to improve her focus. Gradually, she begins to notice a change in her world, as glimpses of the existence of another realm in conjunction with ours begin to appear. She meets a pixie with butterfly wings riding a crow (the one who had been replacing her pills with normal vitamins so that this could be possible) and finds out that she is the daughter of the King of the Unseelie Court of the Fairies, the one in charge of the wind, who brings the balance of cool to the Seelie Queen's warmth. But her father is missing from his throne, and Megan must travel deep into the fairy realm to find him...

Or the consequences for her world will be devastating.
I had never known much about the Seelie/Unseelie lore before reading this book. I just knew that the Seelie were the pretty, colorful, "happy" fairy folk, and the Unseelie were the ugly, dark, "foul" ones.