Reader's Review: "Rise of the Firebird" by Amy Kuivalainen 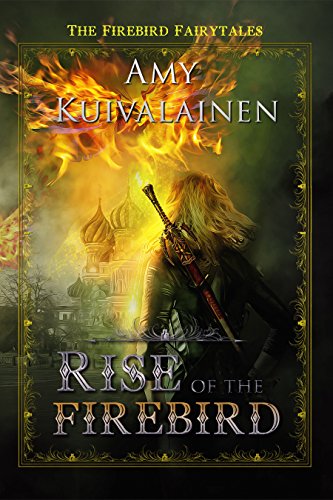 Synopsis from Amazon:
Travelling from the battlefields of Skazki to the Underworld of Tuonela, Anya and her companions encounter the vicious dark goddess Louhi and gain two magician's, the mad hero Kullervo and Eldon Blaise - apprentice of Merlin himself. As devastating secrets of history and the heart are revealed, Anya must fight the darkness within her and rise up to be a symbol for the Neutral rebel army that rallies under the banner of the firebird. Ready to restore the balance at any price, the final battle of the three armies will shape the worlds forever.

In the concluding chapter of The Firebird Fairytales Anya must choose what she is fighting for and what she's willing to sacrifice to save those she loves.
>>>>>>>>>>>

Yanka is busy amassing power after the havoc she wrought in Cry of the Firebird, and Anya is done running and cowering. After recovering from everything that happened to her in a protected space among the Alfr, Anya learns that she must go to yet another unexplored realm beyond the real world and Skazki--the Underworld. Only there will she meet the last few allies and acquire the weapons she needs to stop Yanka once and for all.
Meanwhile, the sorceress' game against Baba Yaga shifts into its final moves...

Kuivalainen has really established herself as a literary force to be reckoned with. I can't tell where the old folklore ends and her own spin begins--it all feels very ancient and grounded in myth, giving rise to legends of its own! The magical sequences, the drawn-out emotions... Everything just pulls you along... I spent several nights thinking "just a chapter or two before bed" and then finally calling it quits when I realize that it's been three hours and I can hardly keep my eyes open! It's the deep, rich, awesome storytelling that keeps you in its grasp and doesn't let go. It's the unique, vivid characters that come to life in your mind and are walking and talking with their own mannerisms and interaction styles. It's the dramatic and surreal settings that become as much characters in their own rights as the people who inhabit them. Everything ties together and lifts up into a glorious symphony of words that feels positively spellbinding every time I open the cover!

When it ended, I was just about beside myself. The rush of the emotional rollercoaster, its highs and lows, just left me adrift. The story came to a close, and I knew I was going to miss everyone, both the "old" characters that I'd been familiar with since the beginning, and the "new" ones just introduced here in the final act of the trilogy--highly entertaining ones, and yet in such a short time, they were given their due moments to shine in the final battle, so I didn't feel like they got "gypped" in any way, for not even "existing" till the very end!

On the whole, Rise of the Firebird was a supremely satisfying close to a fantastic trilogy. I give it a *****5 STAR***** rating, and add to that the Upstream Writer Certified TOTALLY Recommended endorsement. It's been quite an experience growing and learning and changing with these characters, and I am absolutely ready to read more Kuivalainen and experience more of her awesome world-building, as it really does feel like there would be so much more to explore in the world she's crafted, beyond just Anya's story. And that's the best kind of world-building there is!