Upstream Updates: How is it August Already?? 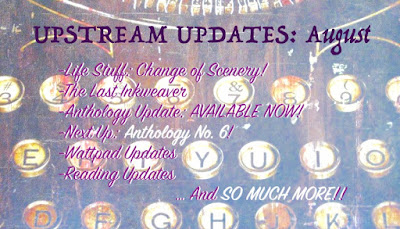 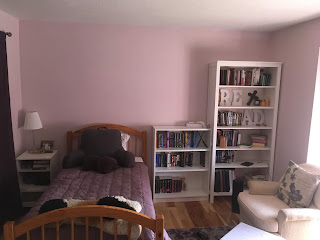 Yep, there's definitely a change in the view of my reading nook! I've moved bedrooms in the home--and this one I got to design myself, hence the profusion of PURPLE! I love my new little space, with it's view of the window (since the windows in the other bedroom were too high to enjoy much!) and the fact that this is really the first time I got to design a whole room myself (the little-known struggles of living with many siblings!) and I'm especially proud of my bookshelves--going from one overflowing bookshelf to TWO with room to spare is pretty nifty!
Needless to say, this bedroom project is where most of my summer went, so there wasn't a whole lot to be said for how much I was writing... or not writing, as the case may be...
Word count totals for June: 18,700
Word count totals for July: 20,803

So I'm still staying abreast of things... Just not as much as I anticipated! Maybe working full time was better motivation to prioritize my writing, and thus I was able to consistently turn out the word totals I wanted. Who knows? I'm dreadfully behind this month, but we still have a couple weeks to go, right?

I tell you what won't be taking up a whole lot of my writing time anymore: THE LAST INKWEAVER, because I am finally ready for the last chapter! No more subdividing chapters, no more agonizing over tricky parts--now it's just tying up the loose ends for this story, and setting up for Book 2! (If you don't remember me saying how the Wordspinner Chronicles is going to be a 4-book series... Head over to THE SHELF and scroll down till you see this mock cover!)
Yes, this is going to be a 4-book series. Don't know how long it would take me to publish them, whether I'd wait till I write them all, or just publish this one, work on other half-finished projects and get those running before starting a new project, or say "sorry my dudes!" to those projects and start the new book anyway!
Certainly The Last Inkweaver has a while to go before it's publish-ready. At over 270 pages and more than 170K words, I know it's hefty, and there will be things that my beta team will tell me need to change or go away... but at least it's done, and it is indeed better than the first draft! I'm not like those writers who can self-beta and write many drafts back to back--I need some feedback first, and then I can move forward.

Yep, you read that right!
The anthology for which I started writing "Red, The Wolf" is currently live for pre-ordering on Amazon, and the official release date is September 25--so get yours and don't miss a moment! I've still got a bunch of teasers to post--more fun facts and excerpts headed your way! Once those finish up, though, it will FINALLY be time to get back to the serial! If you've missed out on the promo posts so far, you have the choice of either scrolling down to see them, or you can follow these helpful links!
"Red, The Wolf": [Excerpt] [Fun Facts] "Dangerous": [Excerpt] [Fun Facts]
"Nicole Falling: A Southwestern Horror Story": [Excerpt] [Fun Facts]<--*will be posted tomorrow!

That's right! Just like the Dreamtime Fantasy Authors who brought you Dreamtime Dragons wanted to do a second anthology--guess who else opted to do the same? The Tapestry Group, the ones responsible for the anthology Cracks in the Tapestry! The new anthology (working title is "Warping The Tapestry") is more of a sci-fi theme than the fantasy theme of the last one, so I had to do some quick thinking to figure out what I was going to use for it--but thanks to the Flashes of Inspiration series, I had at least one idea that would fit the theme, already started! The inspiration for my short story is going to be the flash fiction "The Legacyof Heroes"! I will be expanding and tweaking the story since the word count limit would be higher, so stay tuned for more info on that one! I'm so excited! Story deadline is October, so by the time of my next update, I should have it submitted so I will be able to tell you more about it by then! 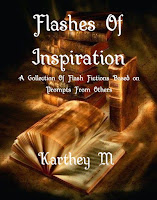 Speaking of Flashes of Inspiration--I've been posting them on Wattpad for a while now, but they don't seem to be attracting as much attention as I hoped. I will say that there was a new flash fiction that I wrote back at the beginning of July, but since I kind of "ended" things on here, I'll be posting it on Wattpad, not here on the blog... so if you want to read a couple new "Flashes of Inspiration", you best head on over there!

THE DRAGON'S MARK, the story I submitted for the Watty's contest, is doing fairly well--I just had somebody read it in a single sitting and she really enjoyed it! So that gives me hope... meanwhile, there are stories still in-progress there, and ones I want to share as soon as I've finished them...

What should I do next? Maybe I'll start posting "The Prince and The Rose" on there, see what people think of that fairy tale twist. OR... I can start posting my contemporary adaptation of Cyrano de Bergerac, which I wrote a very long time ago... What do you think? Let me know in the comments!


My favorite part about traveling is that I get to spend as much of that travel time and the ensuing "down time" reading! I managed to finish three ebooks and four print books in the last two months alone! 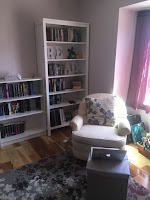 I started State of Fear byMichael Crichton with high hopes--I've really enjoyed just about everything he's written (except Disclosure... but for content reasons, not quality...) and I have to admire the meticulous quality of his plots--but this one almost felt too meticulous at the beginning! People making references to tsunamis, environmental groups and big corporations going at it over global warming, people going here and there and making plans and purchases... Nothing too big and flashy, so I worried it would be slow going.
I should not have worried. Crichton is not a flashy author, and that is a Very Good Thing. Once it narrowed down to a couple characters actually coming in contact with the antagonists' plan underway, it got really intense really fast and I finished it in a couple days! Epic win.
Then after that I got to read the second MYST book, The Book of Ti'ana. It became really fascinating and I understood what was going on a bit more after I actually watched a YouTube video explaining the whole birth of MYST as an interactive and largely "open world" computer game when such things didn't really exist, and the way the Miller brothers went about developing the stories and such. Very enjoyable!
Next up was another Baldacci book, a stand-alone called The Simple Truth. As always, I found it gripping, intense, and extremely well-done! Can't go wrong with Baldacci. He really knows his stuff!
The last book I read was Fried Green Tomatoes At The Whistle Stop Cafe. Yes, the one that the film Fried Green Tomatoes is based on. I'd heard of the film, that's why I casually picked the book off the shelf of the lending library in the staff room at work on the last day of school. As for the story inside, I found it way more entertaining and intriguing than I thought I would! I just kept reading it whenever I had a nice long chunk of time, right until I finished it. Sweet story, and a good small-town-y feel to it.

Which brings us to the ebooks. I have some great news! I have finally reached 10 ebooks read this year, which means I can finally spend that Amazon gift card and get 10 more books beyond the ones I already have! I'm excited. The three books I read were: TYR by N. R. Tupper--a fantastic intergalactic adventure that had my Firefly-loving soul just rejoicing the whole time! Also, I mentioned at the last update that I was nearly finished with You Left Me No Choice by Kelly Blanchard--it did not disappoint! The third ebook (and the one that became the 10th book this year) was Notna by J. D. Cunegan. He's been a pull-no-punches kind of writer, I've noticed, especially in his "urban fantasy crime thriller" series, featuring Jill Andersen, driven cop by day, cyborg vigilante by night--but this full-on supernatural/paranormal adventure took things to a whole new level! As with Mark Lawrence, the gore level had me cringing and skimming through some scenes, but the compelling story and the delightful characters held me and enticed me till the very end!

What's next for my writing escapades? Well, on my nightstand I have: Prey and The Lost World (the sequel to Jurassic Park) by Michael Crichton, Lethal White by Robert Galbraith (aka J. K. Rowling--I am definitely a fan of this crime thriller series!), and my first library check out in what feels like FOREVER... Pride: A Pride and Prejudice Remix by Ibi Zoboi, which I've wanted to read ever since I saw it announced!

That's all I have for now--How about you? What have you read over the summer? Did you encounter anything new and exciting? Let me know in the comments! And as always...