Reader's Review: "You Left Me No Choice" by Kelly Blanchard 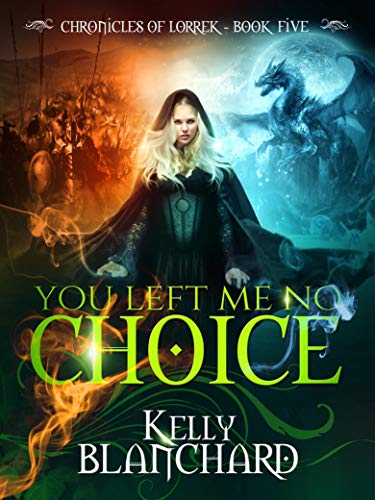 Lorrek once more views the events of the past a thousand years ago to find the origin of the Order and hopefully a weakness. He discovers a world ravaged by war with humanity on the brink of extinction—all due to a single person.

Therina is the bride promised to the king of the immortal kelliphs, but she has other plans. While her betrothed hunts her down, destroying human kingdoms that stand in his way, Therina brings together humans, mages, and dragons to forge a weapon capable of killing the unkillable. Even if the forging of this weapon kills her, at least she would have proven her Dragon Prophecy wrong and given the humans a chance for survival.>>>>>>>

Can it get any better??

Ladies and gentlemen: LORREK'S WORLD HAS A NAME!! WE FINALLY KNOW THE NAME OF THIS VAST COLLECTION OF EPIC KINGDOMS!! I'm not going to tell you what it is, but I HAVE WAITED FIVE WHOLE BOOKS FOR THIS AND IT FEELS GOOD!

AHEM! On to the review.

Four whole books of questions and more questions and cool features with mysterious origins (like the handblades and the World Orbs... or even how the kingdoms got started) and finally we're getting some answers! Way back at the end of Book 3, Lorrek and Radella depart on a ship, on the run from the Thymord Order because of what Lorrek did just before disappearing again... and the last two books have been spent filling in backstory and setting up what promises to be an epic and most satisfying conclusion to a magnificent story!

Here's the thing: I've always used the most grandiose terms to describe all the books in this series. We started with a war between kingdoms that would rival the Battle of The Five Armies, and it just ramped up from there: a malevolent entity from back in some forgotten era resurfacing and laying waste to everything he sees... long-forgotten secrets and surprising connections in unexpected corners of the magic realm, where one small tug in the wrong direction would erase a person's entire existence... One has to wonder where else Blanchard can take this series that it hasn't been already!

But she delivers, every time--to the fullest extent. We're on Book 5 the fictional world is bigger than ever--it's a whole universe beyond the already-massive continent where the story originated! I feel like I'm actually reading recorded archives of a literal civilization, meticulously compiled over centuries by multiple persons...

But it's just one exceptionally gifted author who may have just "cracked" whatever sort of "code" there probably is for being able to produce finely-tuned masterpieces at a relatively steady rate. I am constantly in awe of what she is able to achieve, and I definitely want more!

You Left Me No Choice is stunning and poignant--it is set far back in the history long before Lorrek ever disappeared from Cuskelom, before him or his parents were even born, in the time of the Immortals: Dragons and kelliphs. It's by far the most traditionally-fantasy of the series, as this time period wasn't much for technology, relying on medieval-era machines and magic to get things done--but it's beautiful, and the references to things already hinted at over the course of the series, the explanations of how things came to be, or what really happened back then, is highly gratifying, to say the least!
I tend to get really spoiler-y when reviewing books in this series, so I'm going to try not to do that, but I will say this: if anything I've mentioned sounds remotely interesting, and you're in the market for some good sci-fi/fantasy... there isn't a whole lot that is better than The Chronicles of Lorrek!

Yet again, You Left Me No Choice scores top marks, earning a *****5 STAR***** rating for the way it moved through the plot, the way the characters responded and interacted naturally and not forced, the driving climax and the resolution that not only accomplished the goal of the story itself, but set up answers for questions we've had since Book 1--all in all a satisfying entry to an Upstream Writer Certified ABSOLUTELY RECOMMENDED series!! Definitely check out this series for yourself--and prepare to have your mind blown time and again!