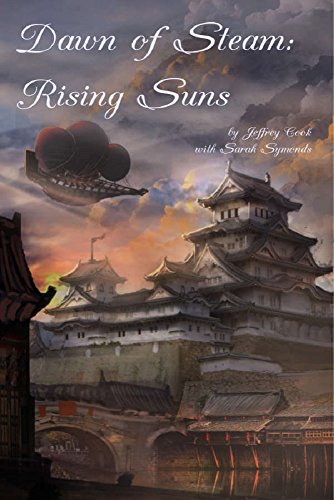 Synopsis from Amazon:
1817 sees the first signs of recovery from the Year Without a Summer – and the beginning of the end of the journey of the airship Dame Fortuna. The crew first accept a unique offer from the Shogun of Japan, traveling with the Dutch contingent from the island of Dejima into the isolationist nation. From there, their travels will take them through the English colonies in Australia and India, into darkest Africa, and eventually home to England. Along the way, confrontations loom, and both personal secrets and national conspiracies are uncovered. By the time a future queen is born, nothing less than the fate of England and the direction of world events are at stake.
>>>>>>>


My Review:
Cook and Symonds have undoubtedly created what can only be termed as a symphony of literature.

The first "movement" was a pleasant introduction, full of new and mysterious motifs and grand themes of sweeping refrains moving through the different sections of the "orchestra."
The second was slightly slower, deeper, containing some intensity, with the "refrains" becoming more familiar and the audience following deeper into the emotions of the music.
This third movement is the grand finale that brings everything back together in one epic conclusion that will give you ALL OF THE FEELS!!!!

The thing that I think Cook has excelled at here, where genuine Victorian-era literature (as in, from the authors of that age) falls sadly short is that he took care to ensure that the readers are well and truly acquainted with the characters, and that those characters progress and develop at a reasonable pace over the course of the action. What began as a simple matter of exploration to uncharted corners turns into a race to stop a murderous traitor and save their homeland from unscrupulous enemies. Even though the perspective is limited, both by the epistolary format, and the fact that the "letters" are predominantly written by one character—the multiple correspondences, some even from other members of the crew, are like soaring lines in a musical score: together, they make a complete idea, amplified by both repetition and differing perspectives.

I loved this whole series. It's a bit thick and the style is relatively antique, but the storytelling is absolutely worth the time it takes, and there is plenty to slake the thirst of even the most voracious reader. Hardening back to the days when even reading adventure novels was an informative, intellectually-stimulating diversion, Cook's "Dawn of Steam" is a fresh treasure trove of a bygone era, fashioning a historic period into a timeless classic all over again.
Dawn of Steam: Rising Suns earns a full-blown *****5 STARS***** from The Upstream Writer, and a Definitely Recommended as well!