Reader's Review: "A Maze And Grace" by Cyn Mackley 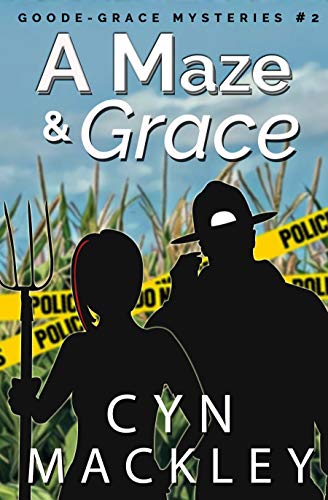 Synopsis from Amazon:
In the second book of the delightful Goode-Grace Mystery series, Deputy Bobby Grace is finally back on the farm after being deployed overseas, but it's far from the peaceful homecoming he was hoping for.

From the unexpected reappearance of the man who broke Trinity's heart, to a dead body in the corn maze, Bobby's got a lot to deal with. Thankfully, his true love, Goth chick farmer Trinity Goode, is there by his side to help untangle the mystery.
>>>>>>>>>
My Review:
Only two books in, but I can absolutely confirm that you don't need constant shenanigans, perilous car chases, or a deep-seated conspiracy triple-dipped in government-sanctioned lies and cover-ups to make a compelling and delightful story!
Mackley absolutely corners the market on a true small-town cozy mystery that keeps a steady pace without all the trimmings of a big-name thriller full of federal agents, will-they-won't-they romantic angst, or big flashy shoot-outs and car chases. She keeps it simple, populates her stories with characters who feel "real" and "average-looking", lays out the conflicts and plot twists in a tidy fashion... and in the process, allows the reader to get to know Bobby and Trinity even more, so that by the end of it the reader feels like just another resident of Himmel who is solidly on Team Goode-Grace!
I adore the variety of characters this series manages to pull together! The first book (linked below) was more of a "backwater country cult" flavor, with Trinity's "city-girl soft Goth" flair kind of clashing with it, but A Maze And Grace brings in more of that big-city vibe, introducing characters from her artist scene like Marcos--the comic-book artist and tabletop game designer who appointed Trinity his "muse" and fancies himself as "the one that got away" (I can't go into too much detail without spoiling the plot but the nerve of him! THE AUDACITY! Oooh, he made me cringe every time his name was mentioned... Such was the quality of the way his character is written!) and Stan and Shelly, the Goth couple that Trinity lived with in New York (whom I found absolutely delightful and I enjoyed every new descriptor whenever they were in a scene!) who all come to visit her in Himmel when Trinity's home becomes the scene of a crime, the victim had been a guest of hers, and everybody's a suspect--but there are definitely some whom the readers want to be suspicious of, more than others! Red herrings and mysterious clues-with-no-explanation abound--but my absolute favorite part is the way that Bobby and Trinity consistently affirm one another. They allow each other to make choices for his or her own life, or if a decision needs discussion, they discuss it--and it's so refreshing to read such a positive, healthy relationship, especially when contrasted with all the toxic drama from other characters!
A Maze And Grace earns itself a full *****5 STAR***** rating and I would add a ringing Upstream Writer Certified ABSOLUTELY RECOMMENDED. If intense thrillers and crime dramas are too much, and you find whodunnits overly complex and dated, definitely pick up a Goode-Grace Mystery and sit back and enjoy a trip to Himmel, where the cooking is fantastic, the people are wonderful, the romance is clean, and the odd crime crops up on occasion!
Further Reading: (Also By The Author/Clean Romance/Intriguing Plot)
The Goode-Grace Mysteries--Cyn Mackley
-American Goth         -A Maze And Grace (*This book)
The Painter Place Saga--Pamela Poole        -Painter Place         -Hugo
The Time Tree Chronicles--Lisa Rae Morris        -The Emergence
The Bhinian Empire--Miriam Forster       -City of A Thousand Dolls        -Empire of Shadows
The Therian Way--Kimberly Rogers       -Leopard's Heart        -Wolf's Path        -Tiger's Shadow
Verona: The Complete Mermaid Tales--Pauline Creeden       -Scales        -Submerged        -Salt        -Surfacing
-Anamatus--Derrick Tribble
-Out of Darkness Rising--Gillian Bronte Adams
-Thimblerig's Ark--Nate Fleming
The Alexander Legacy--Sophronia Belle Lyon       -A Dodge, A Twist, and A Tobacconist        -The Pinocchio Factor
-Black Train--Clareesa Savka
Posted by Leslie C at 5:27 PM