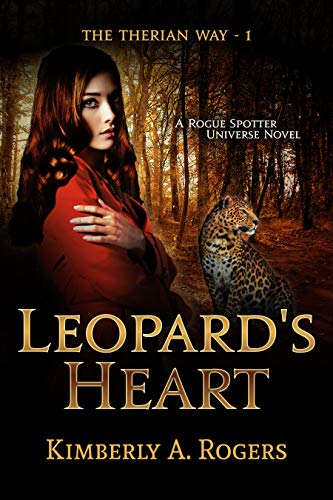 Synopsis from Amazon:
An assassination attempt on the American president threatens to expose the existence of Therians to the Human world. Baran knows that the Fringe have become bold. In a race to find the next assassin before he strikes, Raina and Baran must travel from Washington D.C. to the Elven capital hidden in the Smokey Mountains.

Rising tensions between Therians who respect the centuries-old alliance with the Elves and Fringe sympathizers who clamor to sever all ties between the two peoples make the case and Baran's relationship with Raina even more difficult to navigate. Circumstances have forced them together, but is it only duty that drives his actions? Does Raina's heart belong to her old childhood sweetheart or is the Leopard's heart still to be won?


I first "met" Baran and Raina in the "prequel" novella, which I read this summer, called "Tiger's Paw." I loved the idea from the very first chapter. Rogers has done something incredibly unique, taking the old "Elves and humans coexisting" fantasy trope and not only bringing it into the modern world for a more "urban fantasy" feel, but adding Therianthropes to the mix. And get this: the Therians are Christians, of a sort, the really serious ones professing to follow Yeshua. Good, strong messages carry throughout. All of it together is pure genius.
Whereas Tiger's Paw was mostly centered on Baran and his difficulty dealing with Raina, here in Leopard's heart the focus shifts more toward Raina and her having to deal with the burdens of her past she has tried to hide or run away from. This one only took, like, two chapters for me to become completely obsessed with those two. Baran and his stoic, straight-laced personality clashing with Raina's fiercely independent one. The fact that Raina might be falling for Baran a tiny bit (even though, in the eyes of Therian law, they are wed), but he seems to regard her as only his "Therian duty." The entire book is told in first person, but the perspective switches between Baran and Raina. Rogers has done an excellent job in developing characters with personalities so vastly different, I could tell who was narrating by their style of "speaking." Nothing aids a story more than finding that "voice" for your character that is not your voice. I also loved the interactions of Raina's family, particularly the mother-daughter conversations. Absolutely fantastic.
Rogers also does an excellent job in stringing out the mystery surrounding the assassination attempt, keeping me guessing and drawing me deeper and deeper into the story till all I want to do is sit and read it over and over. I loved all the new characters she added in, both to help and to hinder her main characters, and I loved the incredible and sincere character development that went on over the course of this book. The world she has created is fascinating enough to live in, the characters are vivid enough to leap from the page, and I really want to find out what happens next!

I give "Leopard's Heart" a full-blown *****FIVE STARS***** and an Upstream Writer Certified HEARTILY RECOMMENDED rating!