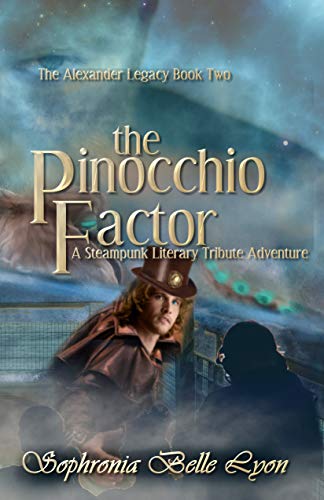 Oliver Twist takes up the tale of the company's adventures after "the Battle of the Bronze Cascade". Can he trust Spring-heeled Jack when so many strange things happen each time he comes around? Costume balls conceal more than the faces of the wealthy and powerful. Trevor Newsome disappears just days before the election but they can't search for him from the London Lockup. When the trip to Switzerland finally becomes a reality, it's for a funeral, not for a wedding.

They begin to learn about quests for power and immortality. In Switzerland they see different kinds of worship of very different kinds of men with terrifying and tragic consequences. And when Long John Silver arrives, Oliver has to do some fast thinking to protect more than just his own life from the pirate who says he only cares about rescuing his daughter.
>>>>>>>>


Behold, the sequel to the first book I ever reviewed! (Not on this blog... But first ever!)
I met "Sophronia" (a pen name) in a writer's group on Facebook, and she introduced me to her series, The Alexander Legacy, and the rousing Victorian steampunk adventures to be had!
Just this spring, I finally had the opportunity to purchase and download the sequel to the novel I enjoyed so much.
As is bound to happen with any series, the second book, while fair enough in its own right, doesn't quite match the fervor of the first one.
The pacing was a lot slower, and I felt like every time the novel introduced a new character, it was either a fresh enemy for this ambiguous quest (I'm sorry, but "Find Out What Professor Evil Is Up To And Stop Him" was never defined clearly enough... Not like the last book, when they were tracking down Spring-Heeled Jack and stopping a serial killer...) or a potential ally... In need of immediate proselytizing. The sheer number of long, drawn-out "come-to-Jesus" conversations is, ironically, the one thing I found most annoying while reading.
I say it is ironic because I, like Sophronia, am a Christian; wouldn't I want to "see these characters redeemed"?
But I am also someone who respects the groundwork laid by somebody else when I use a character that isn't mine. And while there very well could have been Christian characters, certainly the authors themselves were not all thus, and certainly not to the extent that Sophronia is.
Maybe that's what rubbed me the wrong way about this one: in "Tobacconist", the characters had been left largely in their own personas; we were just getting acquainted, and there were those who ascribed to religion and faith, and those who did not. Certainly I did not feel the urgent push to convert every character that this one gave off! For in this one, it really does seem like Sophronia really wanted to drive home the Gospel Truth in as many different facets as she could fit in one cover: from Oliver Twist and Jess Fagin deep in a very long conversation that both told her entire backstory and tried to convince a "hardened soul" that God's way is certainly the right way, to Sluefoot Sue trying to share whole story of the Bible in a garbled Texas accent. And in those moments, the characters were less "theirs" and more "hers," to the detriment of the whole effect. (That, and the inadvertent inclusion of such anachronistic phrases as "PDA" as in "Public Display of Affection"; pretty sure for one thing, they don't use acronyms like this in regular speech; for another, they would have very likely called it something different in Victorian slang... oops...) The appropriation, unfortunately, renders the novel as less of a "tribute" and more of an "inspired by" feel, nearly fanfiction but not quite.

Around these lengthy passages (that did virtually nothing for the plot, just gave a handful of fictional characters assurance of eternal life) the real tale was quite fun. Dr. Moreau, a brace of D'Urbervilles, Long John Silver the giant squid from "20,000 Leagues"... Oh, and Mac Campell shows up as the young engineer from an obscure Sherlock Holmes case that I was familiar enough with to recognize it immediately! I really got excited over that! Also I thought the description of Silver's daughter was really neat.

All in all, the "Pinocchio Factor" wins ****4 STARS**** from The Upstream Writer! The Alexander Legacy is a definite WIN for anybody who (like me) grew up reading the old Victorian classics and loving them greatly!
Further Reading: (Steampunk/Classics/Moral Message/Christian Authors)