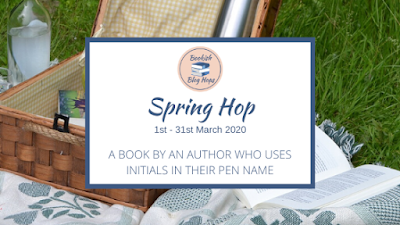 A few of my favorite authors that use initials in their pen name are E.B. White (Charlotte’s Web), A.A. Milne (Winnie the Pooh), and of course, J.K. Rowling (Harry Potter). Over the years, each of these books has been important in my reading life and were all much loved!

Of course JK Rowling is my choice for an author who uses initials in their pen name. The Harry Potter series is what started my love of reading and is still my all time favorite. I can’t count the number of times I’ve read this series and watched the movies. 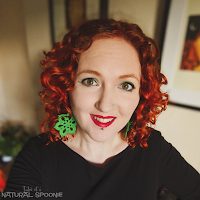 My very first teddy was a Pooh bear, and that began my love of that silly old bear and his wonderful adventures that were created by A.A. Milne. I still have my Winnie the Pooh sat on a shelf in my bedroom. As I have had my own children, I have absolutely loved sharing the stories of Pooh, Piglet, Eeyore, Tigger and all the residents of the 100 Acre Wood.

Other authors I can think of are the poet T.S. Elliot, Nora Roberts who writes under the pseudonym J.D. Robb, H.P. Lovecraft and C.S. Lewis.

To avoid being redundant, I chose for my answer four indie authors whose books I’ve read and still very much enjoy--bet you haven’t read any of these (if you have please can you let me know!) and now is your chance, because they are amazing! 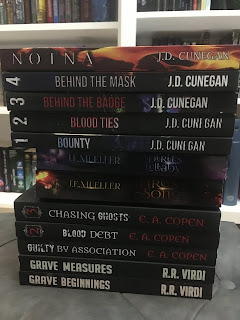 First there’s R. R. Virdi, author of The Grave Reports books (a paranormal/urban fantasy series along the lines of The Dresden Files), the Books of Winter series (well, it’s going to be a series… right now there’s just one book, Dangerous Ways), and a handful of other short stories and stuff. He hobnobs with Larry Correia and Jim Butcher, and his Supernatural (and other nerdy-type) references are on point and I’m always excited when he comes out with new stuff! He’s even started a GameLit series that I haven’t read--but I’m sure it’s great! I’ve interviewed him on my blog >Here<, I did a post about >“The Top 10 Vincent Graves Moments”<, and you can read my reviews of some of his books here: >Grave Beginnings< >Grave Measures< >Grave Dealings< >Dangerous Ways<

Next is E. A. Copen, another paranormal/urban fantasy author, and she writes some kickass female leads, such as Judah Black, the star of her main series, and Anastasia Thorne in the chilling urban fantasy/horror novella Beasts of Babylon. She’s written a few other series since then, the ten-book Lazarus Codex series, and it’s quasi-spin-off (or maybe it’s a tie-in? I don’t know, I haven’t read it) Hellbent Halo. She’s got a style that makes her characters spring to life as you read them, with their very real flaws and their own unique “voices” that make them stand out! You can read my reviews of some of her books here: >Guilty By Association< >Blood Debt< >Beasts of Babylon<

Then there’s J. E. Mueller, who absolutely inspires me with the way she seems to continuously find new and inventive spins on how to weave a fairy tale--she’s got her own trilogy, the Shaudrey Universe that takes on the “classic” trope of “cursed from birth”, and turns it into an unbelievable quest that will have you hanging onto every last word. Then she tried her hand at writing modern-day fairy tale re-tellings with An Unexpected Brew and For The Guild. I own the first two books of her trilogy, and I recently bought e-copies of her re-tellings, but unfortunately, out of everything the only one I’ve read so far is Fire’s Song--but I enjoyed it, as you will probably be able to tell from the review I posted on my blog: >Fire’s Song< Cheers to an author you won’t want to miss, though!

Finally, the last author I’ll mention is J. D. Cunegan. His Jill Andersen series piqued my interest when I heard that the characters were hugely inspired by the TV series Castle (of which we were both avid fans), and upon reading the first few, I can confirm that yes, the resemblance is there--and yet it’s also something new and unique that doesn’t quite read like your average “police procedural.” Then he comes out with a paranormal adventure that is “Buffy the Vampire Slayer meets Indiana Jones” with his novel Notna, and I was completely blown away by his skill in writing in two almost completely different genres--but fitting them so well! Of course Notna is more violent peril and intense gore than the sharp and intriguing Jill Andersen series, but both display a diverse cast of colorful and vivid characters, and I really enjoyed them both--even when it made me a little too squeamish sometimes! Here are my reviews of his books, which I’ve posted on my blog: >Bounty< >Blood Ties< >Behind The Badge< >Notna<

There are more indie authors I’ve read who use their initials, but you can check those out for yourself! 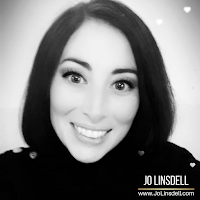 C.S. Lewis is the first to come to mind as he was a huge part of my childhood with his The Chronicles of Narnia. As was A.A. Milne and Winnie the Pooh. J.K. Rowling is another that springs to mind. I bought a paperback copy of Harry Potter and the Philosopher's Stone recently as although I’ve watched all the films and read other books in the series I have yet to read the first one. J.R.R. Tolkien is an author I have yet to read but that’s on my list, and has been for years. I really must get around to reading The Hobbit and The Lord of the Rings.

An author that I’ve really been enjoying lately that uses initials in their pen name is W.R. Gringell. I’ve read all The City Between series, which has really unique world-building for an urban fantasy series. Of course, it also has werewolves, vampires, and Fae because what great urban fantasy doesn’t have paranormal creatures! I need to pick up some of her other stuff soon. 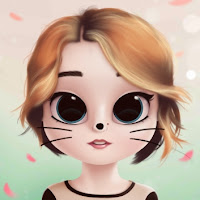 I’m currently catching up on K.J. Charles’ backlist. I love her queer Historical and Paranormal Historical Romance! The A Charm of Magpies series is an absolute must-read for Fantasy and Romance readers, in my opinion. I also loved the Lilywhite Boys series which I listened to as part of my January audiobook marathon. Now I’ve started the Sins in the Cities series. She has such a beautiful writing style and unique story ideas!


How about you? Who are some authors you've read, who use initials in their pen names? Have you read any of the authors listed above? If you haven't, which ones sound the most intriguing? Join the discussion in the comments! Don't forget, if you've missed a few days, there's always the >Introductory Post< with all the links listed by date!
Posted by Leslie C at 9:59 AM