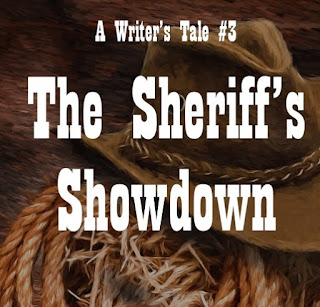 In the list of everything I ever wanted to do in my life, even just the once, for the sake of "experiential writing research", walk through a desert in the blazing sun alone dressed in nothing but a synthetic jumpsuit did not even show up anywhere at all. And yet, thanks to a quirky typewriter, an impossible challenge, and goodness knows what other substance I may or may not have ingested to bring me here--this is exactly where I found myself in this moment.

The thing that irritated me most was the fact that there didn't seem to be any trees or means of actual shade under the clear blue sky and the blazing sun. My only relief came from the fact that the futuristic jumpsuit from the Phantessan space ship possessed some kind of super-wicking ability, evaporating any moisture on contact, so that even my sweat didn't cause any problems. Of course, I still lost those copious amounts of moisture, so I felt the dehydration settle over me at a much faster rate. The bright sunlight reflecting off the pale sand didn't help the dizzy factor, either. I kept my eyes down, watching my shadow as I shambled over the ground. Gradually, I came to more or less of a flat, packed surface, instead of loose gravel and soil, and the track seemed to follow more of a direction, like a road rather than just open scrubland.

A town spread before me, on the valley floor below. I could see the wooden buildings of many shapes and various heights, and if I squinted really hard I could even make out people and animals moving about between them. I almost laughed aloud with relief at the sight--except that I couldn't shake the feeling I was being watched somehow, among those craggy cliffs.

"Time to find out what this story will be like," I murmured, taking long strides down the hill toward the town.

I wasn't exactly watching where I was going, and I nearly spooked someone's horse as they trotted down the road in the opposite direction.

"Watch where you're going!" snapped the rider.

A piercing wolf whistle cut through the air. A couple of drunks eyed me up and down. Lucky for me they were too hosed to stand up straight, but that didn't prevent them from hollering at me.

"No, issa boy," objected his companion as they reeled and staggered right past me. "See'is trousers?"

"Nevva see'd trousers go up to 'is neck like that!"

"Hey you!" barked a gruff voice, and something hard glanced off my cheek and splatted in the mud at my feet. I looked down to see a couple coins I didn't recognize, one of them golden in color (but surely it was too big to be real gold!) and the other a pewter-ish silver. I regarded the man who had thrown them. He made a rude motion with his hands.

"Yeah you... long-johns! Go buy yourself some real clothes, loony!"

He meant it as a slight, I could tell that from the way the people around him burst into a fit of laughter at my expense--but on the other hand, it struck me as a good idea to at least clothe myself in a way to fit in better. I bent down to pick up the coins.

It was so noisy already, I hadn't noticed the extra level of frenzy, but as my fingers closed around the shiny metal discs, I felt a shadow fall over me, heard the words "Look out!" and I stood up just as the fence less than ten yards away from me shattered in front of a runaway wagon headed right for me!

I cringed and threw my arms over my head, crouching down and praying that the horses went around me--but instead of hooves, I felt two arms lift me straight up and sweep me off to the side, as the wagon went thundering out into the middle of the road as people and crates screamed at the narrow escape and dove out of its way. The wagon plowed straight out of town without stopping or overturning.

"Are you all right?" asked a voice just over my head. The arms pulled back and gentle, strong hands supported me as I looked into the honest face of the man who had saved my life.

I gasped, feeling a keen sense of deja vu as I could have been looking into the face of Commander Gerald of Phantessa!

"Y-yes," I stammered, my body quivering as the rush of adrenaline subsided. "I'm fine, thank you."

The man stepped back, pushing the brim of his Stetson back to mop the sweat from his forehead with a kerchief. "It's my pleasure--and, I guess you could say, my job to ensure the safety of any who enter this town." He dusted off the sleeve of his plaid shirt and pointed to the silver badge clipped to his pocket. "I'm the Sheriff, you see. The name's Jerry Coldwell. Who might you be, stranger?" His eyes wrinkled as he talked, but his face was not unkind.

He nodded and shook my hand. "Pleasure to meet you, Laura. Now, if you don't mind my saying..." Sheriff Jerry gave me a casual once-over, "I get the feeling you're not exactly from around here. Care to tell me where that might be?"

Oh, blazes! I hadn't had nearly enough time to cook up a reasonable response--and I already knew from my experience with Commander Gerald that I was absolutely no good trying to bluff on the fly. My eyes began to wander, as I knew that I had probably hesitated far too long to avoid suspicion, even from one as open and honest as the good sheriff before me. I had to say something!

"Sheriff! Sheriff Coldwell! Thank God I've found you!" shouted a man, running up to us.

His hair stood out wildly from his head, and his clothes were streaked with dirt, even a little bit of blood from a cut on his face and a split lip. The wiry man whose skin looked like a bad sunburn all over, waved his hands and grabbed wildly for the Sheriff.

"Hold up there, Ingalls," Sheriff Jerry responded with the utmost calm. "What outlaws? What are you talking about?"

"The thieves!" Ingalls shouted. "Those men driving the wagon that just about ran down half the town! Those men ride with Big Tom the Bandit, and they've made off with nearly half my merchandise!"