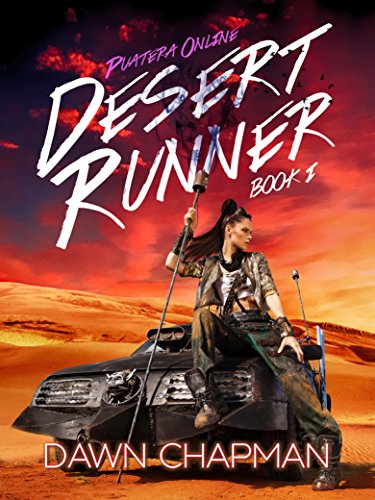 An NPC story.
With her pain potions in short supply, Maddie accepts a deadly run, pick up a package in Trox City and cross the desert plains to Port Troli, the only issues – an unwanted passenger and Tromoal breeding season.
>>>>>>>>>>>>>

A quick review... for an unexpectedly short book!

LitRPG (and its offshoot, "GameLit") is a format I haven't encountered a whole lot, it's just becoming realized as more and more video games emerge that give the player a role in a larger story, not just a series of puzzles and challenges to overcome... it's more than just a game, it's an actual narrative.
The more narrative video games become, then, the easier it is for novelists to then capitalize on it and write a narrative that feels like watching someone play a game. Hence "LitRPG"--or Literary Role Playing Game--becomes a genre in its own right, and "GameLit" (books that are more than just "players entering a virtual world" but that the "virtual world" and the way a "world" works in a game, is the "real world" of the story... like think of if the new Jumanji movie had taken place solely within Jumanji) is born.

The first one I suppose I read, that was sort of like "the characters are playing a virtual reality video game" was Cybermancer Presents by Andrew Barber--I enjoyed the premise, just not some parts of the content! Then there was Ready Player One by Ernest Cline--that was fun, in terms of premise and also content. Now we've come to yet another installment, Desert Runner, the first installment in the Puatera Online series. How does it compare?

Really, really good.
Chapman takes the tack of focusing the story on a character who is a "non-playable character"--they are the ones programmed along a campaign to give The Player stuff, to get The Player from one place to another, to dispense information, or just to "provide atmosphere" with repetitive, scripted responses that don't change tone, don't vary at all--a series of sound bytes that cycle through as long as The Player is within a certain proximity.
Maddie, though, is more than just an NPC--she's self-aware, and dissatisfied with just saying the same things, going the same places, and suffering the same fate every time she interacts with a Player. She recognizes that she has independent thoughts and desires, and she yearns to pursue them. The mission she takes has a chance of giving her just such an opportunity--if she survives it.

Reading the story actually felt like watching someone play through a campaign of a video game--which is a pastime I enjoy, far more than actually playing it myself! However, that sensation also meant that though there were snatches of fascinating sights and interesting "side quests" hinted at in the "playthrough"... those could not be explored to my satisfaction, because I wasn't the "player" in this "game." I did love those descriptions--the breadth and depth of the world, the descriptions and the uniqueness. The "monsters" of the world, the Tromoals, provided sufficient peril while also being a fascinating concept in their own right. I was pleased to find that, as much as Maddie was "supposed" to be a character who would be an easy love interest for The Player and not much good else, her self-awareness allowed her to actually carry feelings for another NPC, and fight against the programmed urge to entangle herself with the Player character--which meant the underlying romantic subplot was suitably mitigated.

I did enjoy this first taste of Puatera Online--but a "taste" is all I got. I could have used a whole lot more! I'd definitely be interested in reading more of the series--a quick search online reveals that there is a "box set" of the first three books in the series, so if they're all as short as this one, then it would probably be in your best interest to get them that way, so that you can experience the full "campaign"!

In terms of the story, character, plot, development, and resolution of Desert Runner itself, I would rate it a good *****4.5 STARS*****. It had a good set up, it built momentum--but that's about all it did. There wasn't anything too grand or epic to reckon with, only the anticipation of that all coming "later in the series"--which is good for a "Part 1" in a book, but perhaps not for a whole book itself. I'm going to cap this off with an Upstream Writer Certified RECOMMENDED endorsement, because Chapman really knows her stuff, and she's a talented world-builder, and if you enjoy video games like the one Maddie is a part of, then this series is definitely going to be worth your while!

The Secret King: Letháo--Dawn Chapman
Domechild--Shiv Ramdas
The Arena--Santana Young
For None of Woman Born--S. D. Curran
Dissolution--Lee S. Hawke
The Children of Dreki--N. R. Tupper
-TYR
Punk Anthologies--Jeffrey Cook et al.
-Sound & Fury: Shakespeare Goes Punk, Vol. 1
-Shakespeare Goes Punk, Vol. 2: Once More Unto The Breach
-What We've Unlearned: Classic Literature Goes Punk
The Chronicles of Lorrek--Kelly Blanchard
-Someday I'll Be Redeemed
-I Still Have A Soul
-I'm Still Alive
-Do You Trust Me?
-You Left Me No Choice
Posted by Leslie C at 6:56 AM