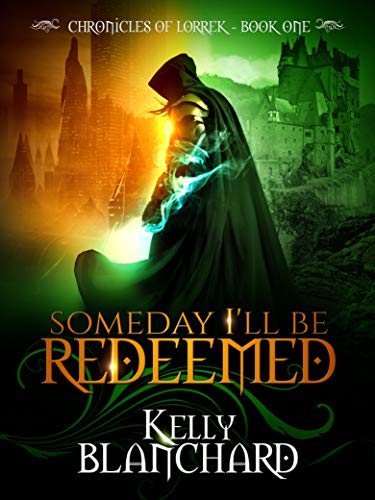 Synopsis from Amazon:
Would you sell your soul to clear your name?

Wrongfully accused of a heinous crime, Prince Lorrek is among three people who know actually what happened. One died. The memory of the other has been erased.

The surrounding kingdoms dissolve into war, but the sorcerer Lorrek remains apart, determined to clear his name. Even that comes at a price, for his own redemption might destroy his family.
>>>>>>>
My Review:
It's a rare author who can seamlessly blend fantasy and science fiction in a way that doesn't seem awkward, but they belong with one another. Mark Lawrence—an author I have raved about time and again—did so in a grim, post-apocalyptic setting: he infused dystopian science fiction with fantasy tropes and magic. Now, Kelly Blanchard gives yet another: adding a science fiction paradigm to a high-fantasy world.

There is magic, yes, but there is also modern/cyberpunk technology in existence, and an opportunity for both to mesh.
Kelly, for those who don't know, does character and author interviews on her website "Meeting With The Muse," and I think it is this practice that gave the insight she needed to create such marvelous living, breathing characters. The plot is driving, the dialogue is strong—the actual climax came at an odd place, since the story jumps a bit to flashbacks just before the end and even within the narrative, there are memories arising... But it was all handled well.

The main thrust of the plot remains consistent: what does one do when all the world assumes that one is a villain, hence the true villains move unnoticed? Time and again, Lorrek is challenged to prove his innocence, while at the same time, remain out of reach from those who want to control him, in order to stop the plans of those who would work dastardly deeds.

It's an exciting book that had my imagination firing on all cylinders the whole time! The characters all had heart, and made you care for them. I loved the way she handled the concept of magic in this world of hers. It was beautiful, funny, thrilling, and definitely an adventure not to be missed!