Reader's Review: "Dawn of Steam: Gods of The Sun" by Jeffrey Cook 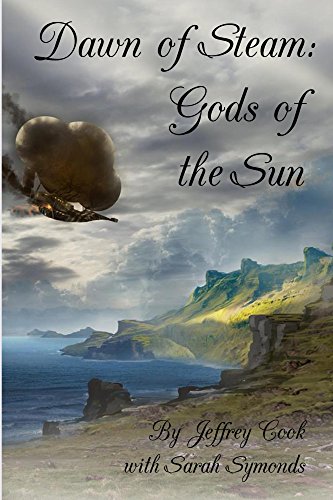 In 1816, Gregory Conan Watts's chronicle of the adventures begun in Dawn of Steam: First Light continues – as does the Year Without a Summer. The crew of the airship Dame Fortuna travel to four continents and are embroiled in combat on three of them: conflict with New Spain in Britain's American colonies, an ambush in Machu Picchu, and entanglement in the Maori Potato Wars in New Zealand. As they progress through darkened skies, Gregory gradually discovers that nothing at all was as he thought it was. All his assumptions are cast into doubt: what their orders are, which tales of foreign lands are true, and what parts of the social order as he knows it really are natural. Also in doubt is whether they will all survive the experience.
Dawn of Steam: Gods of the Sun is an alternate-history, early-era Steampunk epistolary novel.
>>>>>>>>

My Review:
Jules Verne, look out!

Cook, a native of the Pacific Northwest, writes from a time period when that region lay vast and wild, untamed and mostly uninhabited. If I thought First Light was an adventure from the turn of the nineteenth century... Gods of the Sun was a veritable time machine!

So much of the steampunk genre focuses heavily on the mechanisms of the era, leaving the setting within the confines of Industrialized Victorian London. Cook, like Sir James Coltrane and his intrepid crew, dares to circumnavigate the world and show us the hitherto "untouched" regions beyond the "known" world of the time, in all their native glory. First Light took us westward and south across the Americas, and now the mission brings us East across the Atlantic to Australia and Southern Asia.
In his mission to expand the world of early-nineteenth-century Earth, Cook does not neglect his characters. We have been introduced and become acquainted already; now connections are drawn or withheld as we become friends with some characters and count others as enemies. Further histories and new facets of various characters are revealed, and new "corners" of the world with the same vivid detail that thrills me to the core, as if I am reading a firsthand account of someone who actually saw the world with nineteenth-century eyes. Cook's style brings to mind the paintings from the Old Masters--richly detailed, subtly colored, and incredibly lifelike. Through the somewhat-stylized perspective of a journalist, Cook manages to keep even the dry passages somewhat interesting, as only a deeply-creative, practiced "newscaster" can.
In addition to the natural dangers involved with flying a dirigible around the world, Cook brings human emotions through his narrative: there is betrayal and uncertainty, sorrow and vindication, camaraderie and cold shoulders. Just as the relations between the characters are changing, the mission changes in the wake of unforeseen tragedy. An astonishing revelation completely shifts Gregory's initial perspective on the entire journey and the people involved.
All of this is lovingly and faithfully recorded in true journalistic retrospect. Honestly, in reading some of the more harrowing accounts I felt like I was in that time period, reading of current events, and I had to remind myself more than once, "Well, he's writing about all this stuff that has already happened, so I know they survived!"
Absolutely this book earns a full *****5 STARS***** and an Upstream Writer Certified Definitely Recommended endorsement. Granted, this installment felt quite a bit longer than the last one, but maybe that is because things are not so fresh and new and exciting, and, like Cordelia, we are sensing the impending end to this marvelous journey and now only wish for a safe return for the ones we have come to love!