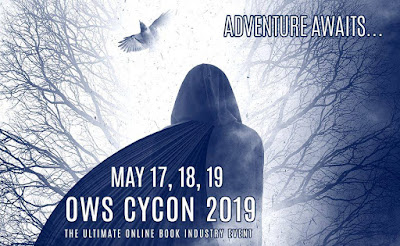 Friends and followers, I'm so excited to share with you an opportunity coming right here to The Upstream Writer!
A few years ago, an author I followed invited me to participate in something called a "Virtual Convention." In a sense, it was kind of like a small convention, and everybody was organized by genre, and everybody had their own event page or their own post in the big event, or even their own segment in a Facebook Group to share about their works and attract readers from other authors' networks. I participated in my first "Virtual Con" before Princess of Undersea was released, but I still had plenty of fun. Actually having published works to talk about just made everything more fun in the ensuing years!

After last year, though, the group who organized and hosted the "Virtual Fantasy Con" announced that they wouldn't be doing it anymore. I wondered if that was going to be the end of virtual cons for me.

Then I joined the Our Write Side group. Originally it was because they had opened up for submissions into an anthology of Cinderella-themed fairy tale twists (which was the reason I started writing "The Dragon's Mark") but when my story ended up double the word count and way past the deadline, I decided to forgo the anthology, but stay connected to the group. It was innovative, exciting, and I figured it was worth keeping an eye out for any future opportunities for anthologies or something.

Then OWS announced that they were going to do a Cyber Con of their own--and I eagerly leaped on board. I signed up under all the genres I had published stories for, and sat back to watch what was going to happen next. Since OWS had its own website outside of Facebook, I knew it was going to look a little different--I wondered how different.

The answer came very shortly thereafter: it was going to be very different.

First of all, the Con is organized so that our "booths" are not on Facebook at all, but on the forums for the official OWS site. Click >HERE< to go straight to my booth, under the Fantasy genre!

Second, I ended up in THREE different CyCon-specific groups, because I had registered for Fantasy, Sci-Fi, and Urban Fantasy. THEN.... Each of those groups had a blog hop they were doing, so when I signed up for those, I ended up in FOUR blog hops, with each organizer requesting that the posts be published before the weekend of the Con.

Folks, the Con is next weekend.

SOO!! Here's how it's going to work! I'll have a new blog hop post every day this next week, and you'll get an opportunity to head over to the OWS forum for fun and excitement (so you might want to go back to my >Author Booth< and bookmark it!), OR if you want to stick around Facebook, the link to the official event is >HERE< and also there will be some CyCon activity going on in the >Fantasy and Sci-Fi Reader's Lounge< for the whole weekend, too!

That being said, here's a schedule about what blog posts you can expect next week! I'll also be coming back to this post to share links to the different blogs where my own posts end up! Stay tuned!

Am I a glutton for punishment for taking on so many things? More than likely.
Am I going to shy away from this opportunity to plug the things I love and interact with more readers while spreading the word about things I've written? Not even a little bit.

Wish me luck! And most of all, I hope to see you there! As always...