Reader's Review: "Ashes of The Firebird" by Amy Kuivalainen 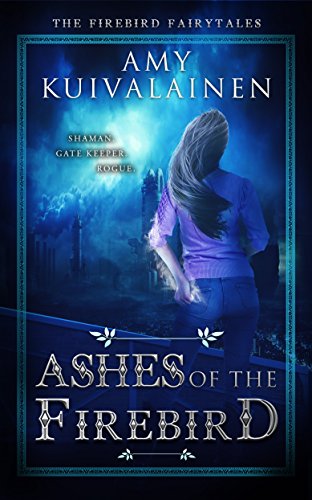 Anya’s magic is keeping Russia safe but not without a price. Her mind broken from the last battle with the dark magician Ladislav, Anya is trapped in the Land of Dreams and is fighting like hell to get back to her body.

Branded as Rogues and hunted by the supernatural world Anya’s friends take her unconscious body to Budapest, a place of new allies where they will be safe. They begin the search for Yanka, Anya’s ancestor and the only person in history with enough power to change the tide of the brewing war.


Oh lordy! What a book!! What a series!!
It’s been almost a year since I read the first book, The Cry of the Firebird, but I entered this one with almost no “book shock”—the story picked up right away, with just enough references to previous events so I could know why certain characters seemed to give others the cold shoulder, or how everybody could be so shocked that two characters are now an item—but not enough that it felt like a complete re-hashing, which would derail the story completely.

None of that happens here. It was as if I never stopped reading. I got right back into the action, and fell even further into the fantastic story. The depth of the lore, both mythological and religious, is what makes this book so exciting. Everything fits neatly, and it all makes sense. As a writer, I can only imagine the extensive research that would go into making something so credible—and I applaud Kuivalainen for making it pertinent, without disrespecting any beliefs.

By far, my favorite part of the book—the characters—is where her skill shines most. I love the fact that we get to know each individual as a person, rather than the author banking on common tropes or stereotypes to pass for characterizations. It doesn’t matter whether they’re human or inhuman, everyone from demon hunter to incubus, firebird to hacker—could have these labels stripped away, and they’d still be the same person. Anya has gone from being completely isolated and alone to having people around to watch, protect, defend, and support her—and she’s still getting used to that. Kuivalainen adds a bit of Alfheim into the mix, giving a glimpse into how the Fae world ties into this one full of demons and sorcery—and it is amazing and beautiful. New character Mychal is an excellent addition to the team, coming along with his own special scars and baggage—but no less vital to the team’s success, in spite of it.
I found myself talking to the book while I read, as if the characters could hear me. The action builds on everything introduced in the first book, and ramps up as the stakes increase—I am now 100% devoted to the outcome of this series, and I desperately want Anya and her allies to succeed against Vasilli and his ilk!

Of course I’m going to give ASHES OF THE FIREBIRD the full *****5 STARS***** rating, and add an Upstream Writer Certified TOTALLY RECOMMENDED endorsement. Kuivalainen has proven that she is not afraid of the worst thing that could happen to her characters—part of me is afraid to move on, lest more devastation happen, but at the same time, I know it will be thrilling and end on a high note, to which I say, “Bring it on!” If you’re looking for an exciting, magical, adventure (some adult content, so it’s not really suitable for kids!) with plenty of action, emotion, and imagination, then the Firebird Fairytales are where it’s at! Pro Tip: Best get the boxset, because once you start, you won’t want to stop reading until the story is done!