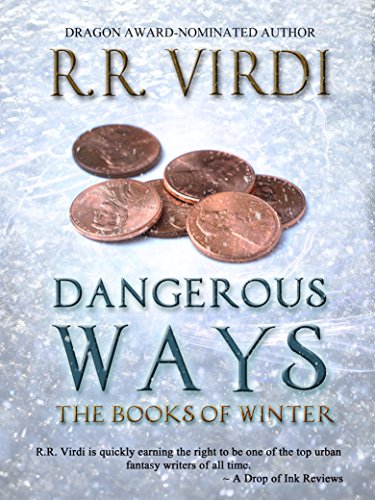 Jonathan Hawthorne has lived over a century beholden to one rule: do not meddle in mortal affairs. He's broken it twice. So when he crosses paths with Cassidy Winters, he's forced to interfere again.

Strike three. And the third time's not the charm.
Hawthorne is swept along as Cassidy slips through the cracks in reality.
And being hunted by bands of monsters doesn't help.

To find the answers they need, they'll have to play in a dangerous world. One where the odds and rules are stacked against them. They will have to navigate magical courts, queens and lords all while trying to keep Cassidy out of their scheming hands.

If they fail, she will end up a pawn in a plot that will consume them all.
Hawthorne will have to face the consequences of his past, and risk his future to ensure Cassidy can have one of her own.

I have been an ardent fan of Virdi's books ever since I read Grave Beginnings--back when I was new to book reviewing and still not sure about the whole thing, since up to that point, I had read mostly classics and books recommended by other people--known and trusted authors. I read that book, though--and it was easily the best book of 2014. Two years later, I eagerly licked through Grave Measures which was every bit as entertaining, if not more so!

That being said.... DANGEROUS WAYS blew me away.
First of all, the tone of the book is so solemn, so mature, that whereas one might feel like Vince Graves invites all manner of snark and eye-rolling--when Jonathan Hawthorne speaks up, you listen. Not just a reluctant "immaterial soul", Jonathan is a Timeless immortal, capable of being wounded, but also of superhuman healing, enabling him to live for at least a century.
Secondly, Virdi has expanded the world to truly Tolkiensian proportions. In Grave Measures, Vince deals with a sidhe and only dabbles slightly in the Neravene. Here, we get to explore more about Ways (the portals to enter the Neravene) and the Fae realm in real, conscious, physical depth. The number of mythical creatures Hawthorne encounters, the ones he knows about and the ones he meets for the first time, far outweighs anything I've read before.
Most of all, I was profoundly enthralled by the prose: The observations by Hawthorne, the various characters surrounding him, the twists and turns their quest takes as they dig to uncover the antagonist (a truly terrifying character you won't see coming!) and all of the heart-wrenching moments, cleverly relieved with much humor and delightfully geeky references! (Joss Whedon would approve!) Badass men and women populate this new world: Tatiana the Norse Shieldmaiden who owns a bakery above Jonathan's living space; George the quirky "doctor" who brooks no complaints from his clients and heals via some rather unorthodox methods; Quentin, the effortlessly British immortal, a Timeless and Jonathan's mentor; Toshiro, the Japanese samurai with a fixation on maintaining balance between the human world and that of the Fae--and Cassie Winters, the girl with more power than she knows what to do with. And those are only some of the human characters! There are trolls, goblins, Gremlins, Dark Elves, dewdrops, and Fae of every sort as well!
There is much careful deliberation behind this story, which makes it all the more compelling! The solemn, heart-wrenching, gallows-humor tale came like "a roundhouse kick to the feels-box"--I laughed at the references, I squealed in delight and in terror, I swore at the characters, and I blew through it in only a few days because I couldn't stop! It's long, but it is so worth it! You do not want to miss this epic journey through a fresh take on urban fantasy!

In all the sixty-plus books I've featured on this blog, there are a handful that, if I could give them more than five stars, I would. This is one of them. But, as matters stand, I must resign myself to giving DANGEROUS WAYS only the fullest *****5 STAR***** rating I can manage, and couple that with an Upstream Writer Certified ABSOLUTELY RECOMMENDED endorsement! Anybody who enjoys a rousing good urban fantasy adventure simply MUST READ this book without delay! Follow the hyperlinked text at the top to order your copy from Amazon today!
Posted by Leslie C at 5:05 PM