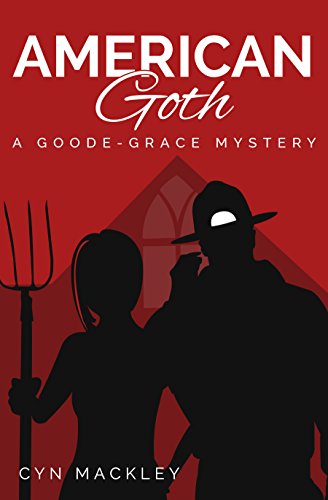 When her grandfather dies mysteriously, New York City artist and goth chick Trinity Goode heads back to her small Ohio hometown to take over the farm and figure out what really happened to the man who always accepted her just as she was. Trinity’s ready to lace up her Doc Marten boots to be a church lady and bake pies for the county fair, but is her hometown ready to welcome her back?

With some help from her old friend Deputy Bobby Grace, she tries to solve the mystery of her Grandfather’s death and track down just who has been hell-bent on ruining her reputation. What she finds out could get her killed.

You can take the girl out of the country, put red streaks in her hair, and dress her all in black, but you can’t take the country out of the girl. Pitchfork in hand, this American Goth is ready to find a killer, save the farm, win a blue ribbon for jam, and just maybe snag herself a good ole country boy.
>>>>>>>

I love cute small-town mystery novels! And this one takes the cake.
It starts with Trinity, a quirky twentysomething with an affinity for "Goth chic" and living in the Big City gets the call that her grandfather in the tiny town where everybody knows everybody has passed suddenly. So she packs up, moves back, and finds just how much has changed in the years since she moved away.

The story is brilliantly told. The death is not a straightforward one; it looks like an accident with her grandpa's tractor—but it might be more of an accident. Himmel (the town) hasn't changed much—but everybody seems to believe the most outlandish gossip concerning Trinity, in spite of the way she can quilt and bake alongside the best of them. Grandpa Hiram already gave the land to the farmer who had been taking care of it, while Trinity got the farm—so what isn't fair about that? Why do they hate her so much?

It's part "simple country living" story, part mystery as Trinity and her friend Bobby Grace go investigating into the unanswered questions surrounding her grandfather's sudden death, and the source of the despicable rumors someone has been spreading about her for the last decade—and the truth behind those strange looking, "not-Amish" neighbors near the farm that may not be running some sort of religious commune...

I fell in love with the characters, and I definitely enjoyed the story! Every moment, every character—yes, even the not-so-great ones—absolutely glistens with careful craftsmanship and oozes creativity and life! AMERICAN GOTH gets *****5 STARS***** from me, and I'm going to throw in an Upstream Writer Certified Heartily Recommended to boot!

If you're looking for a new author to follow, with great pacing, fantastic characters, and fun, unique covers in primary shades, Cyn Mackley is your girl!