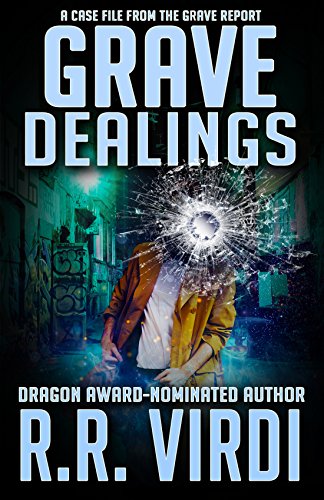 
Don't make deals with the paranormal. They're better at it than you, and they never play fair.


Paranormal investigator and soul without a body, Vincent Graves, did just that—a deal made in desperation. Now it's coming back to bite him in the middle of a case.
He has 57 hours to investigate a string of deaths involving people who've made some devilish bargains. Too bad devils don't deal in good faith. It'd be easy enough, if he didn't have to deal with things such as:
>>>>>>>


Hang on to your feels!

I have been an ardent fan of Virdi’s writing since the first Grave Report book. The first two books, I would say, were a constant roller-coaster of thrills and wild romps through monsters and lore, with plenty of opportunity for sarcastic clap-backs and goofy nerd references that had me giggling in between intense scenes of comical peril.

This one was different. GRAVE DEALINGS is a bit darker, more somber and serious in tone, and so much in-depth character development and introspection that I found myself taking it in far more slowly than the other two books. Vince receives the longest time limit of all his cases so far, and yet he spends a good long time in the Neravene with Lyshae, which skews the proportion of time for him, so even though he had supposedly so much extra time, he really wasn’t able to use it much on the case itself before it was gone.

Something else Virdi does in this book that makes it distinct from the other two is that we really get a sense of a long game. It’s no longer about Vince living from case to case; things happen that broaden the story arc to encompass more than just Vince and his strange “life”; there are political machinations happening that will affect Vince not just in this particular adventure, but sometime in an installment to come.

Basically, if you make it through Book Three, you are a True Fan—and you are locked in for the long haul.

Oh, and by the way, (minor spoiler), Vince’s new host isn’t a random recluse with very little social life like Norman; it isn’t someone under close watch in a protected environment like Charles.

The body he’s taken on (or put into, as it were) was someone very close to none other than Camilla Ortiz. So there is that extremely sensitive dimension he has to deal with, along with the strange case of the friends around his host experiencing extraordinary fortune in their business endeavors, while certain people connected to them suddenly drop dead.

This monster he chases is particularly diabolical, and the peril he faces is more intense and threatens more than just the life of his erstwhile host—Vince’s very survival is threatened.

The thing that I love most about this book is that it serves as irrefutable proof that Virdi unequivocally has what it takes to avoid the muddle of a long series that takes on a formula. He has managed to create three very distinct adventures. Just when you think you are comfortable enough to start predicting how things are going to turn out, Virdi throws in another plot twist, another threat that completely thwarts what we think ought to happen, yet setting up a whole new way of resolving the conflict.

Yet again, Virdi pulls off the seeming impossible, and for that, GRAVE DEALINGS earns a *****5 STAR***** rating, and just in case I have been too reticent, I would also like to append an Upstream Writer Certified ABSOLUTELY RECOMMENDED. This book was absolutely stellar through and through, I love the way GRAVE DEALINGS functions in the longer arc, and I am definitely looking forward to many, MANY more adventures in store as the series unfolds!