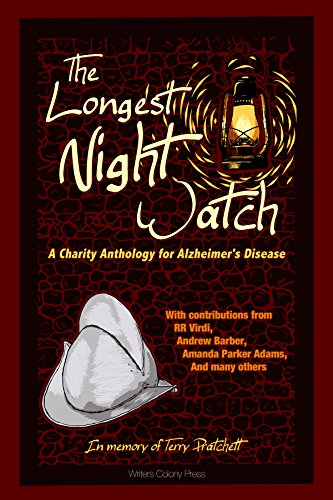 Synopsis from Amazon:
On March 12th, 2015, the writing world lost one of its greatest contemporary heroes - Sir Terrence "Terry" Pratchett. To honor his life, a group of writers decided to publish an anthology of stories that showcased his influence on their writing, and also would help bring awareness of the disease that contributed to his end, Alzheimer's Disease.
Found in this volume are eleven stories and poems by nine authors, most of which are humorous and fantastical, but threaded among those are tales of the loss and confusion unique to Alzheimer's, dementia, and those who must watch their loved ones disappear before their eyes. Contributing writers include Amanda Parker Adams, Andrew Barber, Joshua L. Cejka, Connie Cockrell, Janet Gershen-Siegel, D.R. Perry, R.R. Virdi, Michael Walton and Lacey D. Sutton.
All proceeds from sales of this book will be donated to the Alzheimer's Association, in the hope of one day finding a cure.
>>>>>>

Now that I think about it, I believe this book was among the first books I won in a giveaway a few years ago, and it's been sitting in the queue ever since.

I am so glad I finally got around to reading it!
I confess, I haven't read much Pratchett, but what I read, I liked, and I do believe this group of authors has done great homage to that legendary author.

Lying in Wait by Connie Cockerell was a fun start to the novel, and a good foretaste of the shenanigans yet to come! The deadpan delivery of bizarre twists on the story it appears to be on the surface is exactly the same sort of art that I found in Pratchett's own short stories.

Joshua L. Cejka had two stories in this anthology, and they could not be more different. Out of Time, I found eclectic and silly at first glance, yet poignant and thought-provoking at the second look, in true Pratchett form. Cuhlyn's Tale, on the other hand, I felt was the most disturbing of them all. Quite frankly, I kind of felt that I couldn't get through it fast enough.

Props by Janet Gershen-Siegel was another tale firmly rooted in the poignant and intriguing category. It presents as a record from an unreliable narrator—but the twist ending is not one to be missed!

Lords, Ladies, and the Dracomorph by Andrew Barber, I found rather curious. I've only read one of his Cybermancer series, and, well—this one had dragons. I like dragons.

Remember Me by Amanda Parker Adams was definitely touching to the quick! I think it served as a very tangible reminder of the cause that motivated this anthology: all proceeds go to research into Alzheimer's, finding better treatment methods or even possibly a cure. It's a beautiful story, and very well-written.

Chance Fortunes by R. R. Virdi was, true to form, a rollicking good time! I am already a huge fan of his work, and this felt like a fitting tribute to Pratchett's flair for bungling, endearing wizards thrust into circumstances out of their control.

Blame it on The Moonlight by Michael Walton was unexpectedly fun! It did a good job remaining demure and unassuming at first, rapidly diving into the strange "when the lights go out," as the saying goes. I liked it!

Bedtime Stories by Lacey D. Sutton was a neat twist on old legends! What starts as a decent story with a rather morbid-minded nanny turns into a spooky-sweet discovery. It definitely harkened back to the Puritain days of cautionary tales being popular because adults were convinced that scaring the pants off their kids was an effective way of controlling their behavior... but how do you scare someone who knows the Bogeyman as a friend?

Lastly, the two poems by Andrew Barber and D. R. Perry book-ending the anthology were sweet and touching.

The anthology, as a whole, earns ****4 STARS**** from the Upstream Writer, and I believe would make Sir Terry proud, if he could have read it. The fact that all proceeds are going directly into Alzheimer's research—absolutely a worthy cause, if there ever was one—serves as extra motivation to get yourself a book that not only benefits you with a host of wonderful stories, but benefits others as well!
Further Reading: Charity Anthologies/Books by authors in this group/Short Story Collections