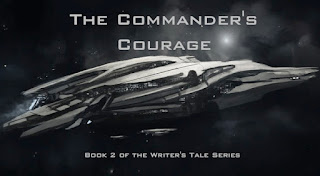 A soft chuckle erupted behind me.
"Disable protocols," a male voice commanded.
I lurched forward as the box released me. The person reached out and helped me regain my balance.
"Careful now," he cautioned.
I twisted to face him. I saw a kind face, deep-indigo eyes, and a mop of dusty-brown hair. He grinned at me, fidgeting with the cuffs of his grey uniform. The collar was shaped differently, and he bore a smaller insignia, but I recognized the fabric. He glanced at my shoulder and his eyebrow twitched as he nodded toward it. "You seem to be missing something there," he observed.
Was he looking for a pin? "Oh no, I'm not an officer," I babbled, trying desperately to play it cool, like I belonged here. "I'm just a guest on the ship. I don't know why these bots seem to have it in for me!" I vented some of my frustration with a firm kick in the direction of the bot. The stupid cube didn’t move, and I ended up with a sore ankle.
The boy shook his head. "That's not what I meant." He pointed to his own shoulder, which bore a metallic wafer exactly like the keycard now residing in my pocket. "See? You're supposed to have it on the outside."
I rolled my eyes and pulled out the keycard. "That's what this is about?" I turned it over in my hands. There didn't seem to be any method of attaching it to my clothes. Did mine not come with it? "I just thought that as long as I was carrying it, I would be fine—dumb bots!" I scoffed.
My erstwhile rescuer chuckled a little as he took the keycard from me. Pressing it flat against my sleeve, he waited a few seconds, and when his hand came away, the keycard stayed. My own hand instantly reached for it. "How did you—" The keycard slid off easily, and when I put it back on my sleeve, it stuck like Velcro.
"The bots can't see through clothing, they can only detect what's on the surface," he explained. "That's why you have to wear it on the outside. But if you wear this way, you shouldn't be stopped again." He grinned and extended his hand. "I'm Marx—er, Private Marxam Vendenmir, by the way--but please don’t call me that. Just Marx is fine."
I shook hands with him. "Good to meet you, Marx; I am Laura, a delegate from—"
He shook his head. "It doesn't matter anymore; we're all from somewhere, right? But now we're all here, under the protection of the Phantessan Military."
I snorted, remembering the treatment I got from Commander Gerald. "Yeah, right... Protection," I repeated his words.
Marx smiled but said nothing. Instead, he changed the subject and asked me, "So have you gotten the grand tour yet?"
I shook my head. "Nope; the only places I've seen besides the inside of my room are the medical bay and the command bridge."
Marx batted the air with his hand. "That's not anything!" He scoffed. "Would you mind if I showed you around? I know where all the cool places are."
I couldn't help the slow grin creeping over my face. After meeting the captain and the commander, I didn't expect anyone to be this nice! "Sure," I said. "I'd like that."

Marx led me out of the living quarters and down a right-hand corridor. I noticed that the halls were illuminated by tiny glowing strips along the floor and the ceiling. Many people crossed the walkways, back and forth, and I began to notice different colors of uniforms: not all of them were just the plain grey; some were white, purple, green, or yellow. Sometimes I would catch someone in a grey uniform with stripes of one of these colors.
Marx must have looked over and caught me staring, because he asked, "Did you find something interesting?"
I blinked as the walkway wrapped around a thick steel column and gently sloped upward.
"Um, sort of," I muttered. "Why do the different officers have different-colored uniforms?"
Marx nodded. "The uniforms don't mean they are officers; all ship personnel wear them. Grey for military." He pointed out examples as he explained them. "The white uniform means medical personnel, the people in purple deal with Communications, such as running messages or translating them, green means artillery and weaponry, and the ones in yellow are the flight stewards."
I couldn't help making a crack as I looked at the milling rainbow with new understanding, "So, no redshirts, huh?"
Marx frowned in confusion, "Does the color have some kind of significance on your homeworld?"
Poor kid; he genuinely had no idea. "Sort of, I guess."
Just then, a young woman in a blue uniform brushed past us, headed for the doorway at the end of the walkway.
"What's the blue one for?" I asked my guide.
"Blue means science," he answered, nodding toward the door. "That's the ship's laboratory and research sector. It's closer to the middle of the ship than the other sectors, and it's well-guarded." He glanced down at the walkway, and I saw a glowing blue line warning us of some kind of boundary.
"Why is it guarded?" I asked as we headed away from the labs and down toward another sector. "Is it because they are working on bioweapons or some kind of secret project?"
Marx chuckled, "Not at all; just ask any Blue what they're working on and they will talk your ear off—but you won't understand any of it." He laughed and wagged his head, "It's guarded because the whole sector is full of academics who have never touched a gun in their lives. If anybody were to storm the ship and gain access to all those dangerous chemicals and worthy-smart people, they wouldn't be able to fight back."
"Oh." I liked his explanation better.

We passed another doorway to Sector 6 and kept going.
"What's over there?" I asked.
"Nothing interesting," Marx answered with a shrug. "Just the supply hold, full of equipment and provisions. Over there," he pointed to the Sector 9 doorway, in the level below us, "is the armory, below that is the hangar, and right here," he pointed ahead of us as we approached Sector 4, "is the recreation center." He grinned as he swiped his keycard across the scanner at the entrance, and motioned for me to do the same. "It's mostly VR stuff," he continued as we made our way down the connecting tunnel. "But at least there is always the kinesthetic option."
Children and people about our age milled about the stark room, managing not to bump into each other as they interacted with some unseen world within the goofy-looking headsets they wore.
When I glanced at Marx to ask a question, he already held two headsets.
He saw the question coming and offered one to me. "Put this on, I'll show you how it works."
I slid the helmet over my head. A soft cushion gently cupped my ears, and the goggles over my eyes seemed to overlay the bland surroundings with a digital world bursting with color. Instead of a room full of people, I stood in a forest full of trees and bushes. A deer even bounded in the distance.
"See, everything registers as an obstruction or part of the environment unless you allow it," said Marx's voice, but when I looked toward the spot where he had been standing, all I saw was a shrub.
"Where are you?" I asked.
"You have to activate interaction," Marx said. "Say ALLOW INTERACTION."
I repeated the words, and instantly, my new friend stood at my side in the forest.
He glanced around approvingly. "Guess these settings were from the last person who used this helmet."
Helmet? I raised my hands to my head, but I only felt my hair. I remembered putting on a helmet--but where did it go?
Marx saw the movement and chuckled, "Not much experience with VR, huh? Of course, now that the helmet is activated, you're not going to be able to actually feel it."
"Oh." I dropped my hands. "I knew that." I looked down at the grass around my feet gently blowing in a warm breeze. “So now what do we do?” I felt like I could stand and watch the forest for hours. It seemed like every time I blinked, there was something new and different to see.
Marx squinted at the trees, obviously not as impressed as I was. “Well, there’s not much to do in this enviro, other than just walk around.” He took my hand. “Here, come with me and I’ll show you the sport court.”
I took two steps, and we stood in the environment displaying in Marx’s helmet: a wide field full of people kicking around a wide assortment of brightly-colored soccer balls.
Posted by Leslie C at 4:01 PM