This day had to be the most miserable day of her life. Elaine Elliot, heiress to a vast fortune in Texas, cringed and tottered across the quad of Upton University as the rain poured.
"Stupid weatherman!" She growled, feeling the rain soak through her silk blouse and collect in her Louboutin pumps and run down her cheeks and flatten her hair. "Of course it would be the only profession where he can be wrong most of the time and still keep his job!" She charged through the door, ignoring the pained shout that resounded on the other side.
"Stupid freshman!" She muttered. "Get out of my way!"
She looked up, brushing with freshly-manicured fingers at the streams of mascara running down her face. Her eyes caught a pair of blue ones, and the face they belonged to broke into a smile.
Today officially sucked.
“Elaine!” he cried, running to her side.
She shook her head and waved him away as he got close. “Don’t bother, I’m fine.”
“Please, allow me,” he picked up the stack of books scattered on the floor around her.
Elaine sneered when he offered them to her. “Those aren’t mine,” she declared.
The freshman approached, rubbing her arm where it had collided with the door. “Those are mine,” she took the stack out of his hands. “Thanks, Ed.”
Elaine finished straightening herself and prepared to stride expertly into the Commons Area.
“So, um, Elaine,” Ed still followed her like a hopeful puppy. “I wanted to tell—I mean ask, I wanted to ask you—“
Elaine stopped in her tracks and cranked up her “Southern Charm” to full-blast. She faced Ed with a large, sarcastic grin and crooned, “Oh, sugar, you know the answer’s always gonna be no.”
He persisted. “But the thing is that I just—“
“Look,” she kept her voice tender, her drawl deep, although the words came a little terse. “You’re a numbers guy, right?”
Ed flushed and shrugged bashfully. “Yeah, Business Accounting actually—“
She tapped a finger against her dimple. “Hmm, so do you want to know what your chances are with me?”
Ed’s eyes lit up; the poor, socially-inept soul! “Yeah, I would.”
Elaine moved in for the kill. This was her favorite part. “Take the highest number you can think of,” she began.
Ed blinked as he honestly considered her suggestion. “Like, off the top of my head?”
Elaine maintained her mask of happy. “Whatever you like. Sure, go ahead and name any number.”
“Um, okay…” Ed hemmed and hawed for a moment before he blurted, “Twelve hundred to the millionth power!”
Elaine nodded. “Now multiply that number… by zero.” She paused to bask in his crestfallen face. “That’s how much chance you have with me. Now stop following me around.” She stalked through the door and began scanning the benches and tables. He should be here by now… no way she had missed him already…
Outside the Commons, Ed sighed and walked away. Elaine watched him go with a smirk. Once he was gone, she whirled back and resumed searching for the one she would give anything to get noticed by: George Spencer Herbert Elliot IV.
She spotted him, leaning up against a shelf, with his back to her. Elaine felt her heart flutter in her chest; the way his leg bent ever so slightly, and the way his arm stretched, allowing the shirtsleeve to cling tightly to the contours of his bicep… She could almost hear him muttering softly to himself as she crept closer, watching the back of his perfectly-coiffed head ever so intently. How studious he must be! He hadn’t once glanced over his shoulder. Elaine stifled a giggle as she imagined the look of surprise he would wear when he heard her call his name.
“Oh, Georgie!” she sang out, as she leaned against the edge of the bookshelf.

George snapped straight, and a second pair of hands flattened out against the bookshelf he stood against. Elaine felt the fluttering in her chest freeze over when a small, lithe body slipped out from the space and scuttered away, head ducked to avoid Elaine glimpsing her face. When George turned around, it was Elaine who stared at him in shock.
“What is it this time, Ellie?” George groaned affably. He smiled at her, as if she had not just caught him in the act of hobnobbing with another student—a junior, no less!
“Georgie!” Elaine reproached him. “How could you! Why, I ought to—“
“What?” He shrugged. “Kiss me? Turn me over your knee and swat my backside?” He laughed and ambled past her. “Stop acting like a prude, Elle.”
“But,” Elaine spluttered, clacking after him in her heels, “Don’t you even care about the family’s reputation?”
George wagged his head. “Oh, it’s The Family, is it? Look at me, I’m shaking in my Pumas.” He picked up a few books, winked at a passing sophomore, and set them aside. “A little fun never hurt anyone.”
Elaine leaned against his shoulder, clinging to his arm in case he tried to turn away. “We’re supposed to be getting an education,” she hissed as close to his ear as she could.
George reached over with his free hand and ruffled the hair on the top of her head. He laughed as Elaine tore away with her hands clapped to her rain-ruined hairdo. “I am getting an education,” he protested.
Elaine shot him a dubious glare. “One that will help you become financially stable in your adulthood?”
George grinned roguishly at her. “Definitely.”
Elaine rolled her eyes and stalked away. “You’re impossible!”
“I’m going to make loads of money!” George hollered after her, loud enough for the entire Commons to hear. “Just you watch!”

Elaine stomped away as delicately as she could, so that the pavement wouldn’t scuff her shoes. When she reached the villa at the edge of student housing, she burst through the door and wrenched the shoes off.
Her younger sister Meredith sat in the big armchair, her face buried in a book.
“Let me guess,” she said from between the pages, “he didn’t fall for it again, so you’re just going to sulk about it all afternoon.”
“Don’t even start, Meredith!” Elaine snarled, charging into her room and slamming the door.

Elaine was more or less re-styled and refreshed (after a good long sulk, true to form) by the time Meredith knocked on the door.
“Dinner, unless you’re planning on going out tonight,” Meredith mumbled around a bite of something she was still chewing. “Oh, and this came for you.” She handed Elaine a white envelope and walked back toward the kitchen.
Elaine stared at the package, addressed to “Elaine Elliot.” Her mind whirled with questions. Was it evening already? Had George decided to send her a gift after all? Who else would it be? She had taken great pains to rebuff any and all attentions from every other guy on campus—in spite of the fact that they all seemed steadfastly enamored with her. She opened the envelope, and a small box fell out, along with a card. She read the card first.

“Dear Elaine—I hope you’ll accept this little gift as a token of my feelings for you, in spite of how I may come across in person. I figured a note was the best way to let you know what I couldn’t exactly manage to say in person: I’m going away, on an exchange trip to the University of Edinburgh. I know you think little of my brother and me because my attendance thus far at Upton has been due to generous scholarships, but I hope this trip abroad stands as proof of my academic merit, along with the assurance that, starting next semester, I will be working to fund my own education. I hope we can get to know each other better, without the difference of our tax brackets coming between us. Believe me when I say that you are more than just a rich girl to me. Please wear these and think of me till I get back? Yours faithfully, Eddie

Elaine almost dropped the box in her hand. Eddie? Poor Boy Ed Winston? She almost didn’t want to know what dime-store imitation lay on a bed of cheap velour inside. Slowly, she cracked the lid and gasped.

Inside the box lay a pair of very small, but exquisite emerald earrings. They couldn’t have been more than a carat or two each, but the fact that someone on a full scholarship would splurge on a pair of earrings for a relationship that only existed in his head… Elaine closed the box and left it on the table in her room. She wasn’t about to let Ed Winston mistake any sort of feelings for her whatsoever. She would send the earrings back, and that would be the end of it.
>>>>>>> 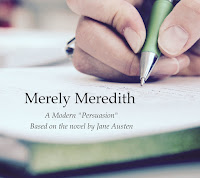 Did you enjoy these characters? Read more excerpts from this unfinished work, titled Merely Meredith. It's an adaptation I am planning based on the novel "Persuasion" by Jane Austen. If you are at all familiar with that work, you might be able to guess which characters correspond to which!