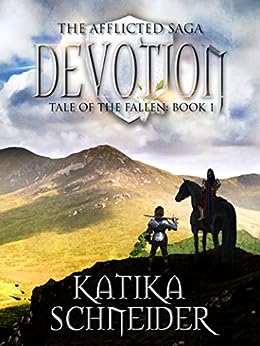 Synopsis from Amazon:
Demons were nothing but legends...

Or so the young General Nessix Teradhel had always believed. Abandoned by her god and caught in a political trap with her late father's old comrade, Nessix had barely kept herself together even before these startling reports appeared.

But now Mathias Sagewind, the fabled White Paladin, has arrived on her quiet island nation of Elidae with confirmation of such terrors. Wielding the name of the Mother Goddess and divine strength not seen in years, he is Elidae's best chance at victory. In the wake of a holy war, Nessix must learn to trust Mathias as he attempts to guide her from a troubled past and protect her from a tragic future.
>>>>>>>


This book taught me a valuable lesson in what happens when a very emotional person gets too invested in not just wonderful characters, but also a specific outcome for those characters. Now that I have calmed down a bit, I can recommend this book!

I will be honest, it kind of crept up on me as I was reading. It was a slow, gentle acquaintance, mildly intriguing at first but gradually more and more irresistible until the last, where a certain outcome for certain characters so completely caught me unawares that I promptly lost all composure! (And I upset a few innocent people and I am very sorry! But really, that one part is maybe five percent of the book, so let's just focus on the other 95 percent, shall we?)

This book is just flat-out amazing. The care and creativity invested by the author just shines in the way different characters' beliefs affect their interactions, and even the direct interactions between the mortal and celestial planes—not a very frequent occurrence in typical fantasy literature, and rarely is it done so well. I absolutely love it when a book can pull off a completely fabricated religious system without coming across as intentionally mocking or over-emphasizing an existing religious system. Brandon Sanderson did it well through the Mistborn series, and Katika Schneider pulls it off here in DEVOTION. The relationship between Mathias and his goddess is contrasted with another character's devotion to the evil entity intent on defeating the goddess and enslaving mankind--er, "fleman"-kind, as the inhabitants here are even a race distinct from humans, though I'm guessing they look a lot like humans. (How's that for another cool thing?)

There are a lot of different kinds of relationships in this book, and they all work together to give a world refreshingly abundant with life, a story that does not conform to your typical "toughened warrior girl goes up against a demon army and receives divine intervention in the form of a scruffy warrior guy and sparks fly and they get together" trope... It's so much more! There's a heartfelt message at its core about what constitutes trust, about the nature of belief, and various examples of, as the title says, Devotion. I spent about a week and a half thoroughly wrapped up in this book, and I would encourage fantasy-lovers looking for something new and different and definitely exciting to do the same! (And hopefully that one scene won't throw you like it threw me!)

I would rate DEVOTION a solid ****4 STARS****, maybe even 4 and a half, and it has absolutely nothing to do with the quality of the writing itself; it is a book written with an engaging style and excellent prose! In fact, if you're the sort who watches Game of Thrones and isn't fazed by character death and scenes of extreme peril, and you're looking for a new kind of fantasy literature to sweep you away—you will very likely be fascinated and entertained by the exceptional world of DEVOTION and the other Tales of the Fallen!