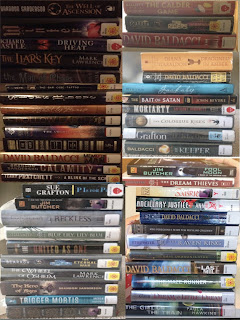 Whoo-wee! Is it the end of the year already? Okay, folks! You know what that means--a look back at all of the reading I did over the last year, and what I would recommend as the Best Books of the year! I will say that I did enjoy reading in batches of ten, and doing the Ranked Reading Lists--and it was rather fortunate that I only did manage to complete 5 lists (50 books total--not my best record, but decent!) because now, for my final Top 10 Reads, here are the Top 2 from each list that I enjoyed most of all! (Accompanied by a pertinent quote from the review)

List #1:
Winter (Lunar Chronicles #4) by Marissa Meyer--"The most perfect adaptation, and excellent closure I could have wished upon star for!"
Liar's Key (Red Queen's War #2) by Mark Lawrence--"How do I love a Mark Lawrence novel? Let me count the ways!"
List #2:
Dream Thieves (Raven Cycle #2) by Maggie Stiefvater--"Once again, every time I sat down to read it (usually before bed) I could not tear myself away."
Fool Moon (Dresden Files #2) by Jim Butcher--"Lovely and wonderful and thrilling and spectacular!"
List #3:
Calamity (Reckoners #3) by Brandon Sanderson--"I have been pining for this book for just about a full year, and it did NOT disappoint!"
Stars Above (Lunar Chronicles #4.5) by Marissa Meyer--"OH THE FEELS THIS WAS EVERYTHING I EVER WANTED IN THE LUNAR CHRONICLES!!"
List #4:
Wheel of Osheim (Red Queen's War #3) by Mark Lawrence--"Superbly satisfying ending to a spectacular series!"
Queen of the Tearling (Tearling #1) by Erika Johansen--"I am completely smitten with this book and all the promises contained therein."
List #5:
The Last Mile (Amos Decker #2) by David Baldacci--"This one definitely takes the cake! I really love Amos Decker as a character."
The Last Dragonslayer (Chronicles of Kazam #1) by Jasper Fforde--"It’s fun, it’s hilarious, it’s British, there’s dragons… I loved it!"

Next up, I wanted to recognize all the indie books I've read this year! I managed to tuck away no less than 30 titles, once again SMASHING the total from last year... and from the looks of my TBR list of books I own but have yet to read... I look forward to once again exceeding that record in 2017!

Be that as it may, choosing a "Best of Selection" proved considerably more difficult than just choosing from an already-ranked list. Eventually, I had to do it by review stars—which, really, hardly reduced it at all. So here are ALL of the 5-Star reviews from 2016—do enjoy these titles, and don't forget to pick up copies for yourself!
The Truth and The Lie (Volumes of the Vemreaux #2 and #3) by Mary E. Twomey--
"If THE WAY was a bare first, clenched for a fight, THE TRUTH was the first round of that fight."
"In a word, THE LIE was PERFECTION. Twomey is an absolute wizard with words."
Street Fair and A Fair Fight (Fair Folk Chronicles #2 and #3) by Jeffrey Cook and Katherine Perkins--
"Once again, Cook and Perkins delivered on every level!"
"Every time I open a Jeffrey Cook novel, I am blown away by the magnitude of the fantasy—and characters so impossibly real that it HURTS."

Escape From Neverland and Dance Into The Wyrd by Nils Visser--
"All urban/contemporary fantasy enthusiasts would do well to purchase a copy for themselves at once! It does not disappoint!"
"Highly recommended for teens and adult readers who grew up on fairy stories and are looking for urban fantasy of considerable depth and substance."


Dissolution by Lee S. Hawke-- "It's poignant, it's relevant, it's thrilling, and it's thoughtful."
Road Brothers by Mark Lawrence--"The same visceral, compelling prose that so drew me to devouring any story with his name attached still shines beautifully here."

Someday I'll Be Redeemed and I Still Have A Soul (Chronicles of Lorrek #1 and #2) by Kelly Blanchard--
"It's an exciting book that had my imagination firing on all cylinders the whole time!"
"It's complex and relentless and broad and explosive all at once."


Grave Measures (Grave Reports #2) by R. R. Virdi--"Virdi delivers on every level--and then some!"
Murder in Absentia by Assaph Mehr--"It's a paranormal investigator... In a toga? Yes, it is. And it couldn't be more brilliant."
Untamed (Untamed Series #1) by Madeline Dyer--"This book just about destroyed any semblance of productivity in me every time I picked it up.... That's how compelling it is." *(Plus, check out that SNAZZY new cover!)

Ghost Hold, Ghost Heart, and Ghost Hope (PSS Chronicles #2-#4) by Ripley Patton--
"I ran out of feelings by the end of it."
"It's intense, it's striking, it's maddening and awesome by turns, and it absolutely gets the job done."
"The story grows and barrels forward at a breakneck pace, but not a single character is abandoned in the wings."
Bounty and Blood Ties by J. D. Cunegan
"I fell in love with the characters, intrigued by the mystery, entertained all the way through, and by the end, I wanted more."
"This fangirl could not be happier!"
Girls Can't Be Knights (Spirit Knights #1) by Lee French--"I am intrigued by the concept ... and I would love to read more of the exploits of a crew I have steadily fallen in love with."
A Wolf's Path (Therian Way #2) by Kimberly Rogers--"A stellar piece of urban fantasy sure to excite fans of shows like Grimm and high fantasy like Lord of the Rings, as well as those who enjoy a good mystery and vivid characters in an urban setting."
Dream Stalker (Talented Series #1) by Amy Hopkins--"Beautiful, enchanting, and wonderful from start to finish."
Skeins Unfurled (Breadth Key Cycle #0.5) by K. M. Vanderbilt--"The plot is complex and yet the Norns themselves could not have woven it better."
Angel in Training (Louisiangel Series #1) by C. L. Coffey--"Looking for something really good to read that's a little urban fantasy, a little 'buddy cop', with a great heroine and supporting characters to get obsessed over? This series is a definite win on all fronts."