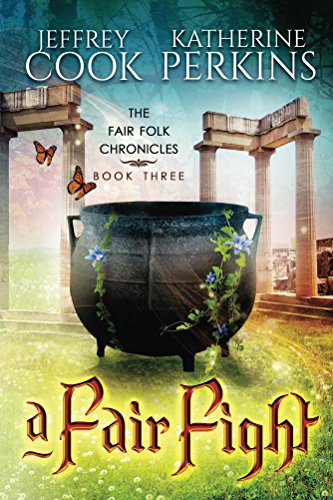 Synopsis from Amazon:
The faeries are preparing for a war throughout worlds. But before the fighting comes the talking.

May is approaching, but there's no way Megan O'Reilly can focus on plans for graduation and beyond when the ancient monsters called the Fomoire are about to break out of their frozen lake. As the ice melts in the Spring air, a conference of magical beings from around the world is being called. Apparently there are a lot of risks involved in properly equipping this kind of party. There are so many places--Earth, different mystic realms, the collective unconscious, an outright netherworld--to go, people to see, and things to be done.

Megan is going to help. No matter how dangerous it gets.
>>>>>>>
My Review:
Every time I open a Jeffrey Cook novel, I am blown away by the magnitude of the fantasy—and characters so impossibly real that it HURTS.

I knew I was going to love this series from the first book. One of my favorite things about Cook's writing is that his continuity is spectacularly on-point. Characters go through intense circumstances and they respond and react in ways that change them and mature them so that the person on the other side is distinct from the one who started out.
I love how, in all of this fantasy and spending incredible lengths of time in a dimension other than the real world, Cook does not neglect Megan's relationship with her parents. It becomes a bigger deal in this installment than in the previous two, and as a character, she handles it beautifully. It is very clear that she loves them both, even so far as they don't actually know each other, and the attention she gets (or doesn't) get from both of them also plays an important part in the development of the plot.

Speaking of "developing relationships" one cannot ignore the marvelous "ship" between Justin and Megan. Their interactions are so adorable they will melt your heart—and yet the respect they both maintain is wonderful—I love that Cook ensures that the reader falls in love with him first, so that Megan doesn't have to waste precious plot time pining after his scent or doubting his love for her, and nonsense like that. He's pledged to her, but they don't make it awkward or uncomfortable. He's adjusting to modern life every bit as much as Megan is adjusting to life in the Fair realm.

Oh, also: the Kahales feature even more in this book. Mr. Kahale has been "absent" from the real world for so long—but the Menehunes are an important part of this war, so as The Kahuna, naturally, he is in for a more prominent role.

The stakes in this plot are higher than ever, as the "villain" this time isn't any one nefarious enemy or despicable entity—it's every evil thing and every monster in every culture, all together. The description of the Fomoire straight-up CREEPS. ME. OUT. If this series ever becomes a movie or a TV series, that will I think be the part where I cringe and look away, because even the descriptions in the book sent chills down my spine!

The ending, though... (*distant sobbing*)
That clinched it. I know it's not the end of the series, but darned if I almost don't want to read the last book—not because it was horrible, but because it was SO GOOD I don't want it to end! The last scenes of the book are glorious and breathtaking—and the last big event broke my heart. I couldn't believe such a wonderfully compelling author to be capable of it, but he did. It happened, and there's no going back. There is only marching forward with the inevitability of Time.

Of course I do not hesitate to give FAIR FIGHT an unreserved *****5 STAR***** rating, and add an Upstream Writer Certified COMPLETELY RECOMMENDED endorsement. I cheered, I giggled, I gasped, I reveled—if you're looking for good, solid fantasy with plenty of fairies and magic and brownies (the Fae, not the dessert... Though I don't doubt Kerr could make some AMAZING desserts!) and Celtic mythology in spades, along with excellent moral characters who win you over from the start, and a perilous challenge that calls everyone to band together to defend the good and the right—look no further than the FAIR FOLK CHRONICLES!