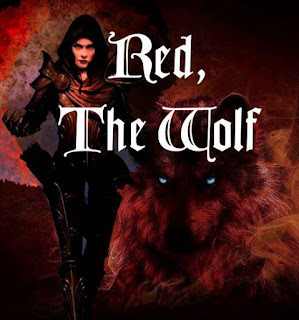 *AUTHOR'S NOTE: All right, this next part is actually (mostly) going to be featured in an anthology, releasing mid-September: Dreamtime Damsels and Fatal Femmes! In light of this, there's a good portion that I've kind of skipped over... You'll find it in detail within the anthology, which I'll link when it's released.

For now, here's a small sampling from the portion of the story that's going to be included in the anthology! In the ensuing weeks, I will be providing samples from the other stories in the collection, so tune in every week to get excited for what's coming!
>>>>>>>>>>>>>>>>>>

Red's nose twitched as she picked up a whiff of something important. "What about you, Mrs. Garrity?" she began casually. "How are things at home? You seem quite a bit more tired than usual.

The blue eyes came up twinkling. "How did you--oh! Never you mind!" Mrs. Garrity waved a hand and let her trembling hands fidget with her apron. "I'm all right, the house is just as lively as ever!”

Red smiled, and took the matron by the hand. "Deborah," she chided her as a peer, not a parent, "I can smell your fatigue. Don't try to hide it from me."

Mrs. Garrity gave a nervous giggle. "My, my!" she clucked her tongue, "What a keen nose you have there, Lady Red!" She pulled away and returned to the basket on the table, carefully counting out each item she retrieved.

Red came to stand next to her, placing a gentle hand on her shoulder. "The better to sniff out signs of distress or danger, my dear," she murmured softly. "Tell me, why do you push yourself so hard?

The older woman set down the silver cruet in her hands and gave a sigh that weighed on her whole body. "If you must know," she said softly, "it's Henny. She's not a problem, don't look like that! It's just that... Well, you know how she was always my right hand, always waiting at my side and helping with absolutely everything I did--oh, it gave her such pleasure to be working along with me! But since she graduated from the Schoolmaster's lessons, last harvest season, she applied for an apprenticeship at Bethany's dress shop. learning about designing and materials and all manner of sewing and tailoring."

Red's brow creased. "And this troubles you?" She didn't see anything wrong with a young woman learning the skills for a profitable trade.

"Not at all," Mrs. Garrity wagged her head. "It's just that she spends so much time at the shop, and I don't want to interfere with this good work she is doing, but at the same time, I've got the young ones to tend to, as well as the duties of the house, and all the other things--I really miss her sometimes!"

But she said this last with a small laugh, letting the younger woman know that it really wasn't a terrible situation, but a frazzled one.

“Ah, here we are!” the goodwife cried, pulling out a small crock of a thick, golden paste made from boiled petals of the crimson hood blooms. She handed it to Red. “There, dear--that will keep you right as rain till after the festival, when I can get more for you.”

Red took the crock and tucked it away in the pocket of her cloak. From the way her side was beginning to ache again, she would need to reapply soon. “Thank you, Deborah,” she murmured. “I hope all goes well for your party.”

Mrs. Garrity’s mouth bent into a small frown. “Why, aren’t you going to stay?”

The cloaked young woman chuckled. “Only you could ever convince me to forget my disdain for socializing!” she mused. “But I think it would be best for me to rest and heal while everyone is happy and peaceful, so that I can be ready for the next time danger strikes.”

Mrs. Garrity gave a wistful sigh. “Oh, you and your Lone Wolf ways!”

Red reached out and took the old woman’s hand. “At least I always know exactly where to go when things get too lonesome.”


Her words brought a smile to Deborah Garrity’s face, and Red took her leave.


Look for "Red, The Wolf" in the upcoming anthology, Dreamtime Damsels and Fatal Femmes, by the Dreamtime Fantasy Authors!